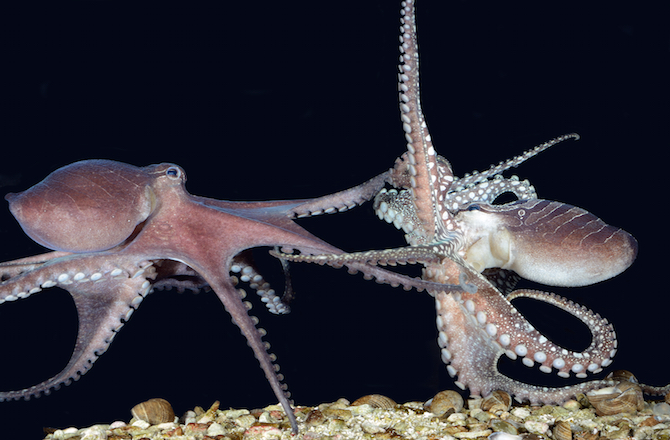 Scientists used to think of octopuses as solitary sea creatures since they were rarely sighted in the company of other cephalopods. However, a new research found that the eight-limbed creatures enjoy some social interaction as well.

A team of scientists from New York, Sydney and Alaska examined the octopuses interacting with each other in the Jervis Bay, Australia. The octopuses found in a rare social setting were recorded on 52 hours of GoPro footage.

This particular gathering of cephalopods was first observed by study co-author Matthew Lawrence during one of his dives. After posting his discovery on an octopus enthusiast website, Lawrence was joined in his research by Peter Godfrey-Smith from the University of Sydney and Prof David Scheel from the Alaska Pacific University.

It was rather difficult to keep a vigilant eye on more than 50 octopuses, even when students offered to help. “It’s harder than it sounds. Trying to keep track of who’s who is very difficult.” The octopuses are also sneaky due to their mimicking abilities which help them change color or shape in a blink of an eye.

Godfrey-Smith said it was fairly difficult to know whether that one octopus moving into view is a new specimen or one that you’ve been observing for the past two hours.

The team said that observing an octopus’ behavior in action is much more difficult than viewing it on science channels on television, but that it was interesting and highly entertaining to see how they respond to one another.

Before now, scientists mostly focused on the way an octopus can change its color depending on how relaxed or threatened they feel or in response to predators.

But this study has shown that while octopuses seem to prefer living on their own, they also interact with others from their species, often by being aggressive and making themselves look darker and bigger.

Scientists are not entirely sure of the living situation they found among the octopuses in Jervis Bay, but some hypothesize they might just tolerate each other’s presence because there are plenty of scallops to go around.

But even so, the team observed a lot of “pushing other animals around, kicking them out of the site, and sometimes vigorous fights,” The students even compared observing the octopus footage to watching an MTV reality show.