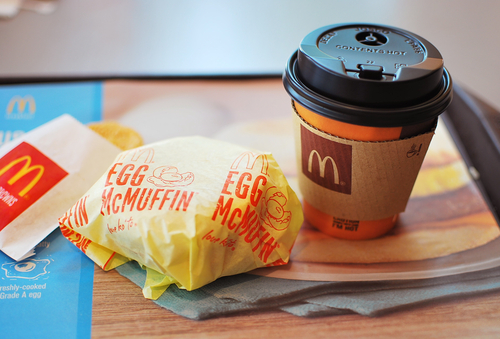 We might witness a comeback of the Golden Arches, getting their glitter back on, as McDonald’s is getting ready to take flight again with new wind under its wings.

This next Monday, the fast food giant is scheduled to report its fourth quarter earnings and sales. And for the first time in forever, Wall Street might actually have some good news for McDonald’s.

The company’s momentum began in the third quarter and analysts are predicting a strong build on that promising growth. McDonald’s reports for same-store sales growth was of 0.9 percent, the first sales increase over the past two years.

For the same-store sales in the United States, Wall Street expects the fourth quarter to bring a rise to 2.1 percent, while the worldwide figure already went up to 3.2 percent. It seems that new CEO Steve Easterbrook might have something to do with the way things turned around.

Easterbrook has been around for almost a year now, trying to change Mickey D’s’ offer – admitting that one of the biggest problems is the stale menu that doesn’t excite the taste buds of its customers anymore.

A lot of burger gourmands ditched McDonald’s in favor of its rivals, restaurants like Smashburger, Five Guys, and Shake Shack. So Easterbrook was quick to embrace change, which came in the shape of some new burgers that offered diners more choices in customizing their sandwiches.

According to Easterbrook, the new strategy is supposed to turn McDonald’s into a “modern progressive burger company” – which is just big talk for food you actually want to eat and that doesn’t taste like dirt.

Back in October, McDonald’s also introduced all-day breakfast, something many fans had long wanted and requested. Thanks to Egg McMuffins for lunch, analysts have hopes that McDonald’s can actually make a comeback.

If predictions are met – a 4.1 percent growth in U.S. same-store sales – this will be the company’s best quarter in almost four years. However, not all the franchisees are happy with the changes, some of whom are seen as bad decisions by executives at corporate headquarters.

Aggressive discounting, for example, might boost traffic and sales, but it might threaten profits. The old Dollar Meny was replaced by McPick 2 which allows customers to choose two items for only two bucks.

Franchisees are also worried about how all-day breakfast and add new items on the menu could complicate the ordering process and cause significantly slower service. Investors, on the other hand, are happy seeing that McDonald’s share have rose more than 25 percent in 2015.
Image Source: Capital