You are here: Home / Tech & Science / One Dose of Enzyme Completely Changes the Behavior of a Major Carpenter Ant 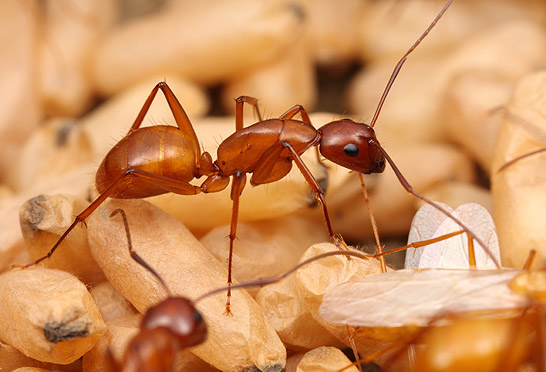 It’s an interesting system Carpenter ants live in, where some of the ants in the colony grow into large, strong guards – the majors – and others become small, inquisitive food scouts – the minors.

Scientists have long been fascinated by this caste system, as it is called, and what causes the ants to become either majors or minors. Even though the two castes present no differences in their genomes, and share the same parents, they turn out extremely different, in both looks and behavior.

So researchers turned to environmental factors to find the answer, thinking the triggers causing the differences must be epigenetic, changing the ants after they are born. This is how they found out that injecting just one dose of enzyme completely changes the behavior of a major carpenter ant’s epigenome for months.

Previous studies have shown that social insects seem to create their biological castes by the help of food. For example, queen bees come to be by having a larva fed with royal jelly.

Thinking this mechanism could also work in carpenter ants, the team of Daniel Simola, a developmental biologist at the University of Pennsylvania, attempted to find out what substance would cause the carpenter ants to transform from one caste into another.

In other words, the team wanted to see whether they could make a major to act like a minor, abandoning her job as guard to become a food scout.

After several experiments with different enzymes that affected the learning and memory centers of the brain, Simola figured out the secret was to inject the enzymes into the brains of major worker ants just shortly after hatching.

It was surprising to see that just a small dosage of the enzyme made the ants take on new social roles instantly. In spite of looking just as big and powerful as their unmodified major sisters, these ants started acting like minors, looking for food.

According to the paper published in Science, the modified majors kept on acting like minors for up to 50 days after the treatment was administered. Seeing that carpenter ant workers live up to 7 years, it’s still unclear whether scientists could perform an alteration that could affect the insects’ behavior their whole lives.

This type of research hopes to find out the chemical mechanisms make us engage in social activities, something that could be relevant to mammals like humans as well. But it’s a slippery slope to go down on.
Image Source: Animals For Children