You are here: Home / Tech & Science / Scientists Found Giant Salamander That Could Be 200 Years Old 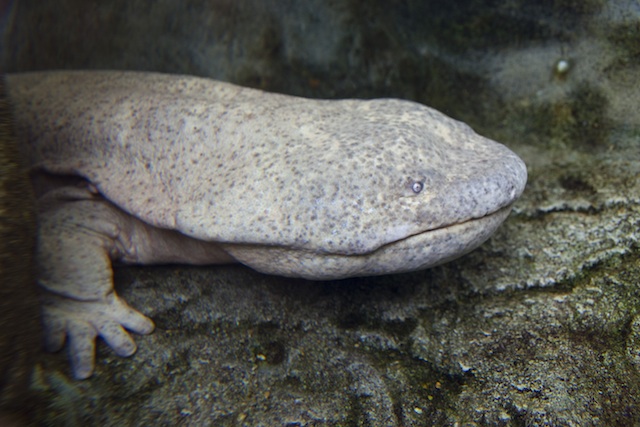 Andrias davidianus is heading for extinction

Scientists found giant salamander that could be 200 years old in a cave outside Chongqing in southwest China. The discovery was initially made by a fishermen, who found the creature underneath a rock and believed to be sick. He called the authorities, who showed up to take the rare specimen to their facilities.

The giant salamander is believed to be part of a species that are the biggest amphibians in the world, and ones who also have an exceedingly long lifespan. They’re known under the name of Andrias davidianus, which can grow up to 6 feet in length, but they are a very rare sight. According to researchers, this species can live up to 200 years in the wild, but they barely live past 50 years in captivity.

The specimen found in southwest China is huge, but relatively not that giant for its species. It’s 4.5 feet in length and weighs 114 pounds. Some reports estimate that the creature is around 200 years old or older. However, researchers from the National Geographic have stated that the amphibian might, in fact, be much younger.

The specimen was taken and moved to a facility “for protection and further study”. Researchers reported that it moves very sluggishly, has poor eyesight, and is generally a nocturnal creature. However, it’s an incredibly rare specimen, and the rest of its kind has seen a rapid decline in the past half a century. Andrias davidianus has experienced a huge 80% drop just in the last 50 years in their population.

On the other hand, hunters and poachers pose as a major risk as well. Enthusiasts often hunt them down, using electrofishing, explosives, or insecticides. They are often killed for the purpose of creating exotic medicines and therapies. Some even hunt them for food, as salamanders are considered a delicacy in China. It’s believed they have several health benefits, such as better skin quality and a boosted libido.

Taking into consideration the dramatic decrease in their numbers within the last 50 years, it’s expected that the species will become extinct in the next half a century. For now, the specimen found in the cave in Chongqing will be placed in a zoo enclosure. It’s believed that it’s the only way to assure their survival, even if it cuts their lifespan.