You are here: Home / Tech & Science / Japan Will Try Again To Put A Spacecraft In Venus’ Orbit 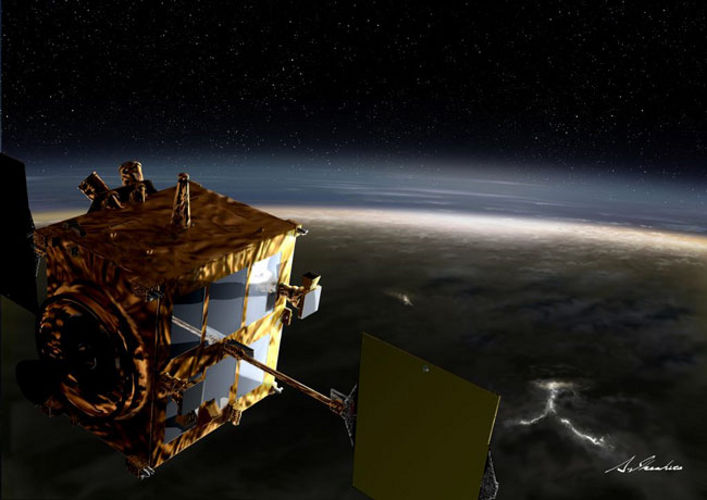 JAXA’s Akatsuki is making its way toward Venus again

Five years after the first attempt failed, Japan will try again to put a spacecraft in Venus’ orbit that will bring more information about the planet’s atmosphere and weather. The orbiter, Akatsuki, will be given a second and final chance to complete the mission that prompted its launch.

In May, 2010, the Japan Aerospace Exploration Agency (JAXA) launched Akatsuki by an H-IIA rocket, with the purpose of observing Venus’ atmosphere. However, it’s main engine failed, and since then, the spacecraft has been orbiting around the Sun instead. The space agency started adjusting its path in 2011, and in 2015, they’re ready to give it another try.

According to JAXA, communications remained integral with the orbiter in spite of the failed attempt. Even more, Akatsuki was surprisingly resistant to the Sun’s heat and radiation. It registered no damage to its equipment in spite of the fact that it was never designed for such an excursion. That paved the way for a second attempt.

On December 7th, 8:51 A.M. in Japan, JAXA reported that they tried again, using the four Reaction Control System thrusters to head for Venus once more. As scheduled, the burn lasted for 20 minutes, and they’re now calculating its orbit. It will take a few more days before news of its success or failure will reach us once again. However, JAXA is glad to announce that Akatsuki is in good health, and they’re confident that this time it will succeed.

In a matter of days, they will announce if Venus Climate Orbiter ‘Akatsuki’ is indeed in the planet’s orbit. Communications were still intact, and if the missions is a success, the orbiter will have around two years of providing with invaluable information about Venus’ atmosphere and weather.

Akatsuki is designed for the purpose of analyzing and observing the thick clouds around the planet in three dimensions. It has six types of different equipment that will provide with detailed information about Venus’ strong winds, estimated to blow at over 220 mph. This exceptional trait causes a ‘super rotation’, which means that the atmosphere rotates faster than the actual planet.

Venus has been shrouded in mystery, and Japan means to unlock more answers. It will reportedly take between 8 to 9 days for the orbiter to slip into its orbit. If it does, observations will begin in April and they will last two years. That means ample of knowledge about Venus’ complex weather patterns, and other meteorological information.

The only peril of the mission is that Akatsuki now has a much higher temperature due to its prolonged exposure in the Sun’s orbit. Perhaps it will still prevail.