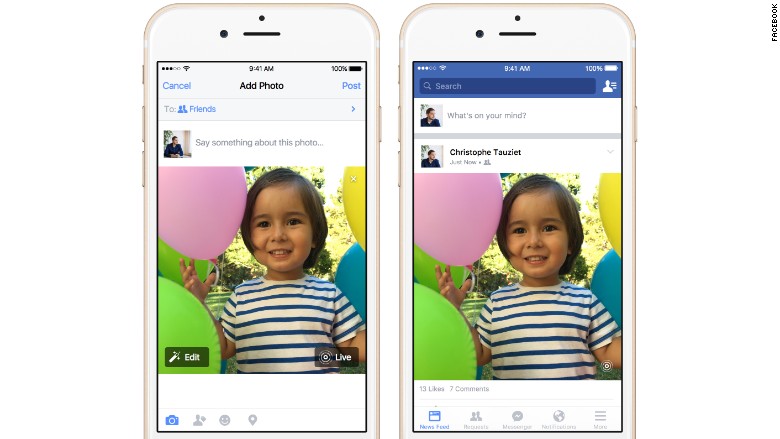 Apple has recently introduced a new feature with its iOS 9 called Live Photos. People can use it to record the moments right before and after they have taken a photo on the iPhone 6S or iPhone 6S Plus – with sound and video included.

Watching a Live Photo you just captured is really easy – you simply press down anywhere on the photo while you’re using an iOS device. Even though the feature has been around since September, it is only now that Facebook’s iOS app allows users to share and view Live Photos.

Uploading a Live Photo via the main Facebook app is equally easy: just tap on the “Photo” button that’s been at the top of the News Feed since forever. Next, choose the Live Photo you want uploaded and also tap on the “Live” icon at the bottom right – this one’s new.

If you miss tapping on the little “Live” icon before posting the picture, then only the still image will be uploaded. After you’ve posted a Live Picture, other users will be able to distinguish them by a circle icon animation that shows at their bottom right.

Pressing down on those photos will enable the Live Photos to play as long as you keep your finger on the screen. This is the same icon that Apple has used in the Camera app to identify Live Photos.

If you have yet to see the “Live” icon in the Facebook app on your iPhone 6S or iPhone 6S Plus, don’t worry; the feature is rolling out gradually to users around the world. For now, only the two latest models have the ability of posting Live Photos, but anyone using devices that run on iOS 9 can see them.

If you’re wondering why Facebook requires you to actively choose the “Live” button each time you upload this special photos, it’s because you might not want the 1.5 seconds captured before and after the still picture to be shared on Facebook.

You might forget you have left the “Live Photos” on while taking photos, and then inadvertently share sensitive content on the platform. So let’s thank Facebook for thinking about this ahead of time and offering us a chance to keep some things private.

Apple Live Photos are also supported by Tumblr – since several weeks ago – and we might expect to see the feature rolled out on Instagram and Facebook Messenger soon.
Image Source: Money CNN