You are here: Home / Tech & Science / The Wonder of Paper That Can Fold Itself And Walk 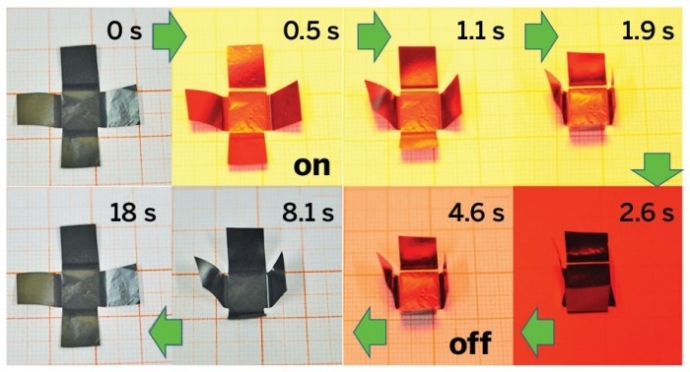 The paper would contract and relax under the laser.

A team of scientists revealed the wonder of paper that can fold itself and walk as it folds, twirls and turns under the influence of lasers. The carbon-based paper can effectively fold up like origami under certain circumstances. Other than magic, it responds to temperature, humidity, and light.

Chinese researchers at the Donghua University, in Shanghai, have managed to create a graphene paper that responds to commands. It’s able to shrink and swell under the influence of lasers, or other factors. The tiny piece of material could, thus, engage in various types of actions, prompted forward by the simple process.

The self-folding graphene paper properly responds to the changes in temperatures brought forth by the laser. With this, it can be manipulated into moving by activating certain regions across its surface. This would prompt the change, and it will result in the material to exert motion.

The carbon-based paper was made from graphene oxide and polydopamine. The nanosheets have the ability of absorbing or exuding molecules of water in order to respond to the different environmental factors. Be it humidity, temperature, or light, the material could effectively be influenced into a different set of actions.

This exceptional property allowed it to be manipulated through lasers. The paper essentially contracts when it’s hit by the beam, and then relaxes when the light is turned off. While it may become the source of multiple magic tricks, it’s also a potentially huge well of opportunities. It has massive potential within a wide arrange of applications.

Due to its conductive qualities, flexibility, and mechanical potential, the graphene paper could be used from fields such as robotics, to the creation of sensor, or in the design of artificial muscles. There are a whole range of areas where it could see its potential fulfilled. It’s qualities might help improve someone’s life, for example.

While making a piece of paper crawl toward you by shooting lasers at it would be particularly amusing, it won’t be the extent of its use. Along with bringing a more exciting edge to origami.

Through the multitude of its responses, the graphene paper could find its place in both medicine, science, and engineering. Solar panels, for one, could see an exceptional improvement. It would prompt a much lesser amount of energy wasted if the panels would work with the light and by the light.

The heat-responding paper could replace multiple polymers in the construction of machinery. It presents with a much faster response, and arrives with multiple properties. In the meantime, its novelty uses could be just entertaining.