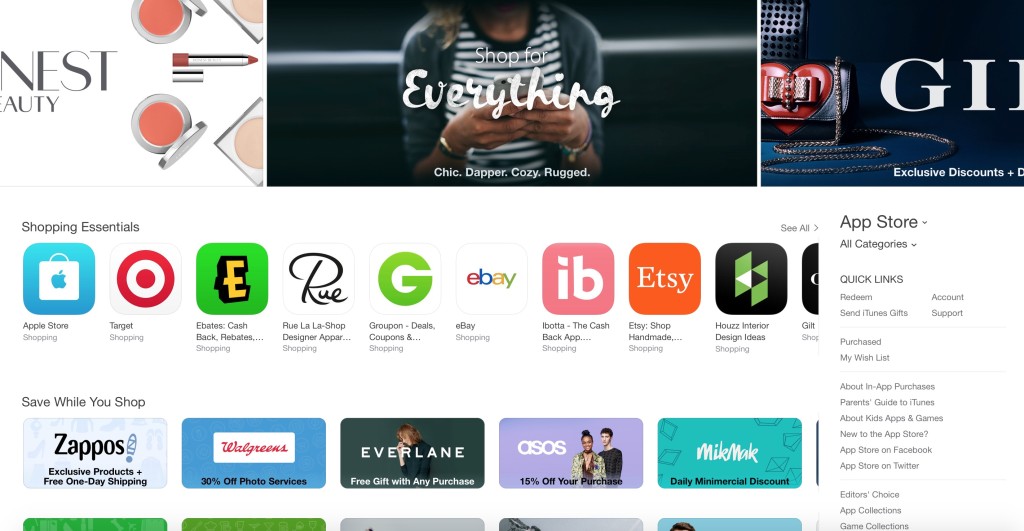 It’s tough staying on top of the tech industry, and Apple Inc. is doing its best. With the smartphone market already reaching saturation in the developed world, companies have started diving into the shopping space, and this Silicon Valley is no exception.

Considering the recently announced mobilegeddon, retails are following their customers to mobile where Apple is doing its best to keep them satisfied. The company’s most recent update is the fingerprint-activated Apple Pay service, a strong move toward reducing the hassle of buying things on a pocket-sized phone.

While Apple Pay may be known for allowing users to skip the whipping out of a credit card in a store and scanning their iPhone or Apple Watch instead, the new service has given fans a new feature to swoon over: the in-app shopping experience, which will prove an even bigger deal.

After all, it’s an easy choice as to what users prefer: having to repeatedly type their credit card info into a tiny touchscreen, or simply pressing their finger against a Touch ID scanner. And this is where the well-known retail world truism will also prove its worth: the easier it is to spend money, the more money customers will spend.

But Apple has dived even deeper in the e-commerce waters with the launch of a new “Shopping” section in the App Store. Moreover, Apple’s timing couldn’t be better: the feature will launch just in time for the holidays.

In order to advertise the new category, the company is really getting in your face with it, featuring it on the App Store homepage with an ad at the top, a link at the bottom, and shopping-related selections spread in between.

Up until now, iOS shopping apps have been buried in App Store categories such as “Lifestyle”, where dating and fitness app – all sorts of apps, for that matter – were making it difficult for interested buyers to find new ways to spend their cash.

But Apple has got smart, creating a sort of mall by creating a separate category for these shopping apps – a place where gift-hunters and spendthrifts can easily access whenever. At the same time, the new section also offers Apple the opportunity to feature the apps that allow the fingerprint-activated Apple Pay.

Plenty of retailers will be featured starting with the vertical’s launch, such as Groupon, Everlane, Walmart, Gilt, and Walgreens. Many of these apps are also preparing their own special deals for the first week of launch, starting November 5.
Image Source: iDownload Blog