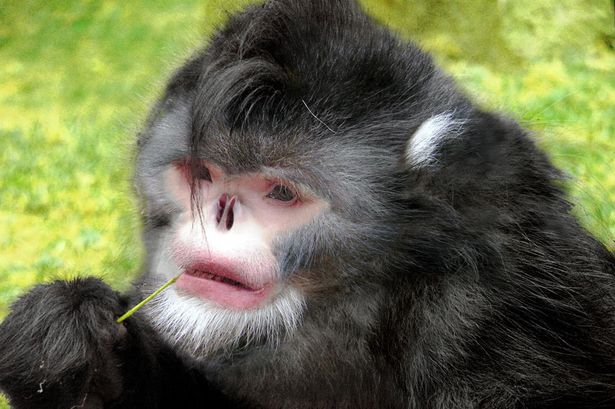 A sneezing monkey was recently discovered in the Himalayas, along with 200 other species living in the ecologically rich area. All kinds of strange animals have found home here

And by strange we mean a “walking” fish and a sneezing monkey that’s sensitive to the rain. In order to prevent triggering the sneezing caused by water stuck into their noses, the monkey has found a rather simple solution: tucking their noses as preventive measure.

Published by the World Wide Fund for Nature, the report called “Hidden Himalayas: Asia’s Wonderland” reveals the brand new wonders discovered in the area, starting from amphibians, invertebrates, plants, fish, a bird, a reptile, and even a new mammal.

Besides being quite unfortunate – remember the sneezing? – the newfound monkey is also the first of its kind. Rather popular among locals due to its loud sneezing habits, the black and white monkey was spotted by scientists in an area of untouched forests and rugged mountains.

The discoveries presented in the WWF report are the result of 5 years of research – between 2009 and 2014 – and they are nothing short of amazing. Considering the sheer number of plants that are yet unnamed, it’s easy to understand why 133 new plants were found in the area.

In addition, scientists include in the report 26 species of fish, 10 species of amphibians, one new reptile, one bird and one mammal – “Snubby,” as the researchers nicknamed the curious monkey. But Snubby is in good company regarding peculiar species discovered in the five-year incursion.

A “Dracula” fish is also part of the WWF report, and also a frog species whose eyebrows look like horns. Researchers were completely mesmerized by the creatures dwelling in the Himalayan region, which covers parts of Myanmar, Nepal and southern Tibet.

Despite being one of the richest ecosystems on Earth biologically-wise, the realm has seen a significant drop in species populations, many of whom have grown dramatically weak. Although it was just discovered, the snub-nosed money is most likely going to be classified as to critically endangered, as authors fear hunting pressures.

The WWF report raises concerns for the safety and future prospects of the species living in the area, mostly because the government in Arunachal Pradesh – a northeastern Indian – offers very limited protection to endangered specimens.

Considering that the Japanese Himalayas are also home to other highly threatened animals, such as the one-horned rhinoceros and the Asian elephant, the WWF and other conservationists have plenty of reasons to be concerned.

The WWF hopes to raise awareness about other dangers in the area, mostly coming from human activities; infrastructural developments, mining, pollution, and wildlife poaching are all harming the animals’ habitats and further endangering them.
Image Source: Mirror.co.uk