You are here: Home / Tech & Science / People Will Not Be Living In The Middle East In 100 Years Due To Climate Change 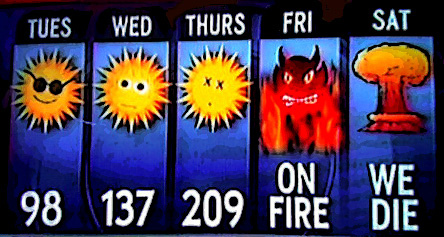 Hot and humid describes the situation they will find themselves in, because people will not be living in the Middle East in 100 years due to climate change.

The human body has evolved along the years, adapting itself to both very low and very high temperatures. For example, to be able to face the scourging weather, the body has a natural system of cooling itself down, through sweat and by sending more blood to the skin, so that it is able to bounce away the heat.

However, none of that will be of any use by 2100 in the Middle east, researchers say. It will be so hot in that part of the world that humans will find it impossible to be outside for more than six hours in a row. High emissions will make for the hottest summer in history, passing the human threshold for survival. The regions that will be most affected will be cities like Abu Dhabi, Doha and even Dubai.

Another issue, besides the heat in these parts of the globe will be the humidity. This is a bigger problem for the human body. When humidity is very high all around our bodies, it moisturizes the skin and doesn’t allow the heat to escape. Also, your sweat doesn’t evaporate, which adds to your body not being able to cool itself off.

When these two factors are combined, heat and humidity, they create what is called the “wet-bulb temperature”, named so by a study performed in 2010. If the temperature of the wet-bulb goes over 35 degrees Celsius, the human body will not be able to take it. Respiratory problems appear, heart failure and even death.

Usually, in Europe and North America, a high wet-bulb temperature means somewhere around 25 degrees Celsius, which is tolerable. But in the Middle East it can easily go up to 30 or 31 degrees Celsius. Luckily for us, 35 was never achieved.

Not now, at least. Because this new study shows that by the year 2100, the wet-bulb temperature may very well go up 35 degrees Celsius in the mentioned parts of the world. It will do so only once every 20 or 30 years, but it will be intolerable for human beings to be outside in that weather.

But even though that particular threshold will be stepped over once every 20 or 30 years, scientists still say that temperatures up to 32 degrees Celsius will become the normal rate in the Persian Gulf. This is why it will be impossible for people to be outside for more than six hours in a row, a scary perspective.