You are here: Home / Tech & Science / Winter is Coming on Mars And NASA’s Opportunity is Ready 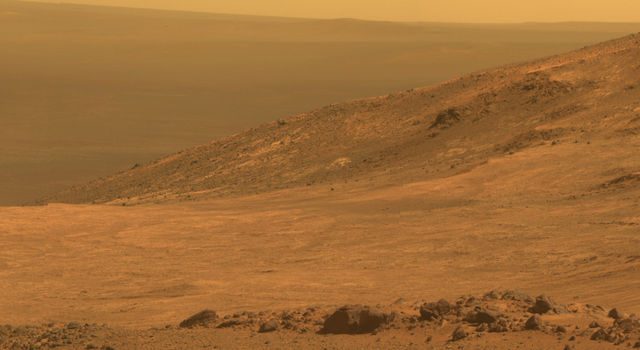 Marathon Valley has been a main point of investigation for Opportunity.

There is no such thing as hibernation for the rover, as winter is coming on Mars and NASA’s Opportunity is ready for more exploration and adjustments in order to transmit information and crucial data of the planet’s surface. Nothing will stop the long-standing rover from continuing its mission.

Back in 2004, NASA’s rovers Spirit and Opportunity landed on the Red Planet for the purpose of exploring the unknown world. What was hoped to be a 3 month long mission far exceeded the expectations of scientists when the two managed to continue on for years and provide them with incredible details about the planet’s surface.

Spirit lasted 6 years on Mars before it broke down, Curiosity was added to the mix of providing better information, and Opportunity is still in full service, wandering around the rocky and dusty surfaces in search for new details about the foreign planet. Since July, it has explored the western part of Marathon Valley, using its panoramic camera to capture stunning images.

It snapped photos of Hinners Point on the northern rim, and showed significant regions of swirling reds that will be the subject of NASA’s investigations. They believe that the areas contain clay minerals, called smectites based on observations made by the Mars Reconnaissance Orbiter.

Smectites are believed to form under water, in much milder conditions than most rocks around the site Opportunity has been roaming about, so they are now a target for further examination that might hold clues to possible environmental changes that had happened on the Red Planet.

Come winter months though, Opportunity is meant to maximize its exposure to the sun, and make use of the solar panels to receive as much needed power as possible. For the upcoming winter, it will travel to the southern parts of Marathon Valley that is part of the Endeavor Crater on the planet’s surface.

In January 2016, the rover will see its shortest day, hitting the minimum of sunlight exposure, but Opportunity Deputy Principal Investigator, Ray Arvidson, expects it to continue functioning and provide just as essential information as it has until now come spring.

Every detail is highly important with the upcoming mission to Mars approaching in the 2030. It may seem like it’s long ways away, but it’s the closest humanity has come to bringing men to the Red Planet, and explore its possible uses or the potential of human settlements.

Astronauts on the International Space Station (ISS) are testing the effects of space on humans, scientists are undergoing isolation in Hawaii, the Orion spacecraft is passing tests for its future mission, and the Mars rovers are doing their part in order to make sure that mankind’s future excursion to the Red Planet will be a tremendous achievement and success.