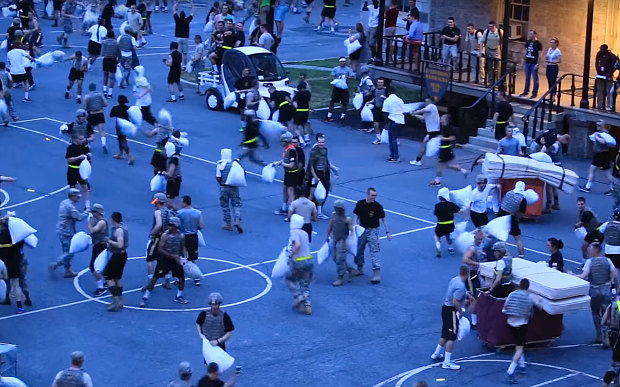 30 cadets were injured during the so-called innocuous fight.

Based on recent reports, the West Point annual pillow fight tradition turned into a bloody carnage after 30 recruits were severely injured on August 20. The investigation has revealed that many cadets hid helmets and other solid objects in the pillows thus changing the meaning of the event.

The West Point annual pillow fight is meant to bond relationships and help recruits celebrate the successful graduation of the summer training program. This year things took an unexpected turn as many participants decided to make the game more dangerous.

Police officers have found out that some cadets hid solid objects in their pillows to make the blows harder. Army helmets were found in many of cadets’ pillows which explains why 30 trainees had multiple head concussions and many broken bones.

The fun was spoiled when ambulances had to come to the scene to collect the injured people. According to medical reports, most cadets had broken heads, necks and arms. Some of them had even lost their teeth during the so-called innocuous fight.

The investigation will continue until authorities will find out who was behind the idea of hiding heavy objects in pillows. Judging by most Twitter messages that recruits posted at the end of the event, nobody expected the annual event to become aggressive.

Lieutenant Colonel Christopher Kasker expressed his deepest regret that the tradition of the New York-based military facility was ruined by thoughtless behavior. In spite of everything, the Lieutenant does not intend to put an end to the pillow fight tradition.

He has stated that he will continue to encourage recruits’ initiatives of setting up relationships and strengthening camaraderie. He felt sorry for the injured cadets and reassured the media that an investigation was being carried out to find the culprits. Kasker is confident that appropriate measures will be taken to prevent such episodes from taking place again in the future.