You are here: Home / Technology / Netflix Explains the Science beyond ‘Netflix and Chill’ Button 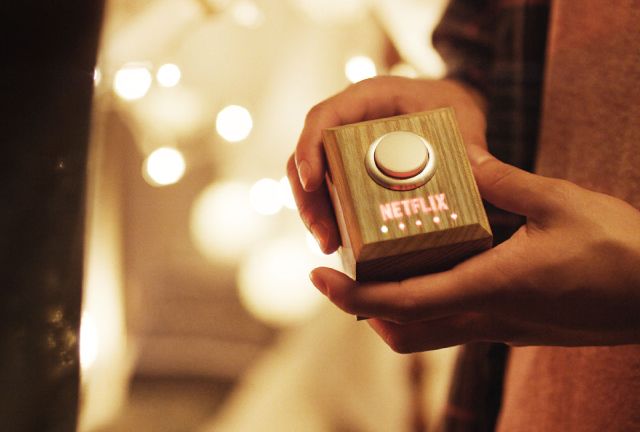 The button turns your house into an oasis of silence.

Forget Internet of Things, Netflix explains the science beyond ‘Netflix and Chill’ button for worn out people who would like to get in a relaxed mood in no time. The prototype was introduced this weekend at the 2015 World Maker Faire.

This year’s edition of World Maker Faire has seen the presentation of many important companies including Netflix. The video streaming company has come up with a rudimentary DIY button that can turn your house into an oasis of silence.

According to the company’s presentation, once pressed, the button dims all the lights in the house and fires up Netflix. ‘The Switch’, as the button is officially called can perform other additional functions: it can turn smartphones off and prompt the ‘Do Not Disturb’ message for users.

Future models may see the introduction of other useful functions, developers have explained. The button may soon be able to order food through special smartphone apps, but it all depends on the impression that the new device will make on users.

And the hard part is only beginning: no matter how useful “The Switch’ may be, Netflix is only suggesting it as a prototype. The device won’t be available on the market any time soon, the company has stated. Interested customers can follow the instructions that Netflix has made available on their official website.

The media reassures users that instructions have been greatly simplified to offer all users the possibility to recreate the prototype. Yet, tech savvies think users have to have a solid ground of technological skills in order to figure out how the button needs to be reconstructed.

Netflix has posted a video to explain people the steps they have to undergo to recreate ‘The Switch’. Developers underline the fact that users do not require technologically advanced objects, but rather MacGyver skills to turn a regular wooden box into a universal remote controller for the house.

Judging from the looks of the video and the instructional materials that Netflix has posted on the website, it looks the device is using infrared and LED bulbs to control smart objects in the house. The only inconvenience may be the fact that the button is not working with regular light bulbs, but only with smart models.