You are here: Home / Tech & Science / Japan’s Mount Aso Erupts But No Casualties Were Reported 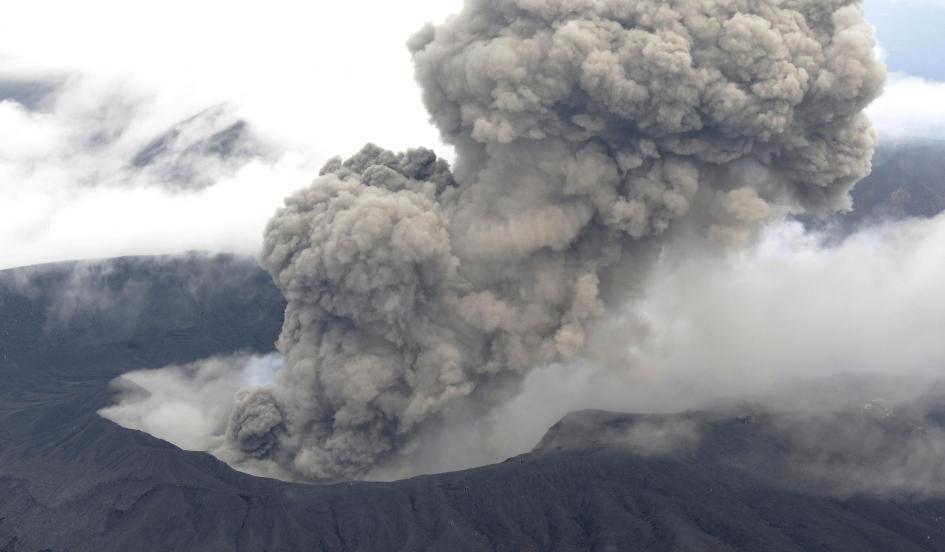 On September 14, tourists in Japan were warned to keep away from Mount Aso, as it erupted with loads of ash spewed in the air and great clouds of smoke covering its top. This event is merely the most recent eruption, as Japan is renowned for its many active volcanoes.

Issuing their third-highest alert, authorities also had more than a dozen flights cancelled due to unsafe travel; the huge volcano located on the main island of Kyushu just started belching ashes as high as several thousand meters into the blue sky.

According to Kimihiko Jo, an Aso official, the unusual plume of ashes was a sudden event; at one point, the erupting seemed to die down as the column started weakening, but it kept on going and getting larger and more violent again.

Mount Aso is a fairly popular tourist attraction in Japan, so local authorities had to evacuate the 30-something tourists that were visiting in the area. Merchants who had set up shop near the volcano were also asked to leave, as a perimeter of around four kilometers has been set up around the crater.

Thanks to the efficiency of the meteorological agency that warned tourists and locals about the threat, the first governmental reports revealed that the eruption didn’t cause any casualties and nobody was injured. These reports were based on the ground work performed by the firefighters and police that were deployed to check on the damage caused by the eruption, according to Prime Minister Shinzo Abe.

The local government is collaborating with the troops so as to protect the lives of people on the eruption site, but the situation seems to be under control, as Abe told reporters in Tokyo. To further secure the area, authorities have cancelled so far 18 domestic flights were cancelled.

Ever since last year when Aso started rumbling back to life, the meteorological agency has been on guard, warning tourists about a possible eruption. Another volcano on the island, Sakurajima, is also the reason for an alert issue, as the seismic activity around it has been increasing significantly.

Japan’s so-called “Ring of Fire” is home for scores of active volcanoes, and some other eruptions haven’t been as easy to contain as this one. Back in June, for example, dozens were killed on Mount Ontake located in central Nagano prefecture, one of Japan’s deadliest event in almost 90 years. Reports estimate that 63 people died, while many of them were entombed in volcanic sludge.
Image Source: News Week