You are here: Home / Tech & Science / Green Female Frogs Are in Danger of Losing Their Males 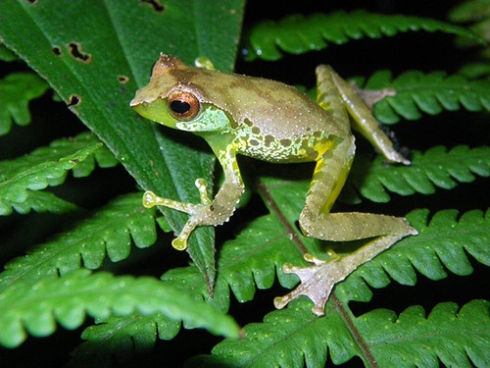 Humans’ suburban lifestyle is affecting the surrounding species, a new study published in the journal of Proceedings of the National Academy of Sciences has concluded. The recent studies that researchers have made indicate that green female frogs are in danger of losing their males as a result of hormonal imbalance.

The research was conducted by collecting hundreds of frogs from 21 ponds in Connecticut. The studied exemplars were closely located, but their habitats presented different degrees of development.

After comparing the frog population in the respective areas, researchers were able to conclude that the main differences occurred in point of gender. The frog population from forest ponds was predominantly masculine, whereas ponds in the suburb had more females than males.

In addition, those few males that survived in suburban ponds presented many female characteristics. David Skelly, the lead author of the study has stated that all males in the 34 ponds had both testicles and eggs.

Scientists wanted to find out what causes these hermaphroditic changes. They believe hormonal disruptions are capable of causing such changes. Consequently, they have looked at earth and water samples and discovered large amounts of atrazine herbicide. The combination between atrazine and other agricultural chemicals used for the maintenance of suburban lawns is the only one responsible for frogs’ “intersex”, scientists have concluded.

Skelly was surprised to see what a strong impact estrogenic chemicals could have on our surrounding environment. He has stated that the simple act of removing native plants from one’s garden could influence the development of a species. Not to mention the agricultural chemicals that owners often use to boost plant production in their garden.

The standard female-male ratio of the Rana clamitans species of frogs remains unknown to scientists. Suburban ponds have a predominantly female population, but the ratio is completely reversed in forest ponds. When in a clean environment, most born frogs are males, leading the pond population with a 60-40 percent ratio.

Skelly has concluded that the research has proven once again that people need to take measures to protect wildlife species. It is also raising many questions in relation to suburbanization works, which cause disruptions within all ecosystems.