You are here: Home / Technology / How Grandmothers Convinced Men to Become Monogamous 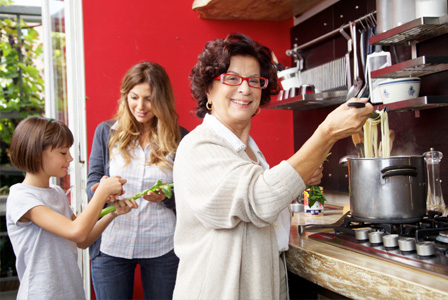 They might say it’s not so, but grandmothers have a strong impact on society and human evolution.

Scientists Kristen Hawkes put forth the hypothesis that grandmothers contributed to committed relationships a long time ago. Her latest research explains how grandmothers convinced men to become monogamous and form long-lasting relationships with their wives instead of mating with a multitude of females.

For most of us, grandmothers have an important role in history because they have educated and raised us. Scientists, however, think grandmothers might have had other contributions on humanity, as well.

You’re probably aware of grandmothers’ need to constantly pester us with questions about our intentions to settle down and behave like proper men and women. It appears that this conduct has convinced men to abandon their primitive mating habits and to settle themselves with longer, solider relationships.

By feeding and nurturing children, grandmothers have allowed mothers to have babies sooner. Men, on the other hand, were no longer interested in finding new compatible partners because their wives could fulfill their reproductive needs. Thus, pair bonding has become more stable, males being interested in protecting their female partners from possible competition.

Grandmothers, who lived longer, helped raise more children and the bond between the two partners grew even stronger. Males quickly changed their behavior because protecting their women from competition was a lot easier than constantly competing with older adults for younger females.

Kristen Hawkes’ theory is contradicting many of the past studies; hence other scientists’ reluctance towards the new findings. Her new hypothesis has debunked the male hunter theory, according to which ‘pair bonding’ was established when the male began providing food for his female partner and their offspring.

Based on these previous studies, relationships were regarded as a sort of bargain between males and females. The latter needed someone to provide for their children, while the former needed descendants. Their agreement has led to the stable family bonds we practice at present.

Hawkes believes there was another stage between the two phases and that males practiced polygamy before they decided to become monogamous. In her opinion, it was grandmothers and not hunter males, who have eased the transition from one behavior to another and allowed women to reproduce again.

Evolutionary studies have also confirmed Hawkes’ new findings. Their previous analyses have proven that males prefer to focus on one single partner and fend competition instead of finding new partners again and again. Courtship is never easy.