You are here: Home / Health / From Now on, Men Can Use Laser Razors 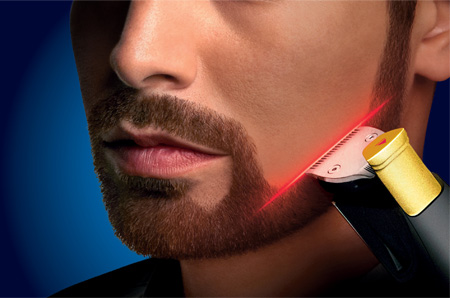 The laser wavelength that producers have selected for the new razor can remove all hairs.

It has been confirmed, from now on, men can use laser razors due to the invention that Skarp has recently presented. The company plans to revolutionize the ‘shaving’ process and to make it easier for all users, even those, who have very sensitive skin.

Razors have been around for a long time; for too long, if you ask razor producer Skarp, who wants to ‘bring shaving to the 21st century’. The company has just introduced a new model of razor that functions with laser light and promises cut-free shaves.

Traditional razors can harm users, especially if they have sensitive skins. Most users complain of skin rashes, burns and cuts after using old razors, but Skarp think they have come up with the right solution for them. They have invented the laser-based razor that can even function without water or shaving foam.

According to the video posted by the company, the razor uses a special laser light which can attack the hair layers of chromophore. These layers may be found in all hair colors, which means the laser shaving tool can function properly on all hair types.

The model of the laser razor was invented in 2001, but Skarp needed seven additional years until the product was eventually completed in 2008. During this time interval, researchers conducted many experiments to determine the correct wavelength they should use on the razor for the latter to be able to cut all hairs.

In the end, they have come up with this new design which will be available for sale starting March 2016. The new razor is very similar in form to traditional razors and this because producers did not want users to go through the cumbersome process of learning a new shaving technique.

Judging from the presentation in the video, all users have to do is carry out shaving-like movements during which the razor will burn the hairs. Scientists claim the process is completely safe and users won’t suffer any burns or incidents during shaving. On the contrary, it is much safer than traditional shaving and it can guarantee the complete removal of the hair.

The company did not provide additional details in relation to the efficiency of the new shaving technique. We assume the laser light will weaken the structure of the hair and prevent it from growing long again in a short period of time. The new shaving tool can be used both by women and men, the company has explained.

As expected, the miraculous laser shaver won’t come without any financial efforts. Users will have to pay a starting price of $159 to purchase the new razor and prices may vary from one region to another.