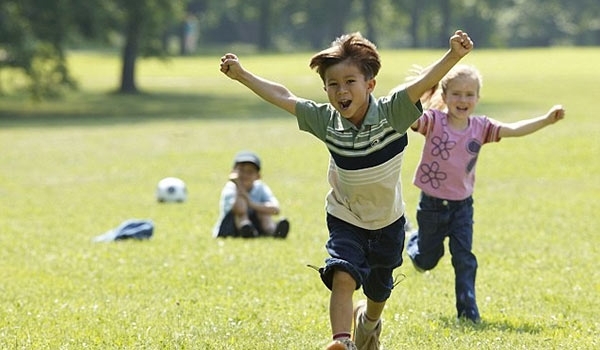 Chinese researchers have found that the risk of nearsightedness could be reduced if the children have a school activity each day that requires spending around 45 minutes outside. Nearsightedness – or myopia, as it’s called in medical terms – is associated with a growth in the eye that can be inhibited by dopamine.

Even though the study was conducted in China alone, leading author Dr. Mingguang He of the Zhongshan Ophthalmic Centre, Guangzhou, thinks that its results apply to children all around the world. It might sound like an easy feat, but getting children to spend time in the outdoors has become a matter of bribing them to take a break from the harmful electronic devices.

Academics were thrilled to discover that encouraging kids to play outside instead of having their hands and faces glued to their smartphones and tablets is not only a good way to prevent obesity, but can also protect their eyesight. In China, the percentage of high school graduates who suffer from myopia has reached sky-high rates, up to 90 percent.

Adding outdoor activities in the curriculum over the past 3 years has also significantly reduced the myopic shift, a less common measure of myopia. The children in the study were 7 years old, on average. While six schools were asked to add one outdoor activity at the end of each school day, other six with regular class schedule were followed as control group.

Three years into the study, researchers noticed a 9.1 percent difference between the two groups of children, with youngsters spending more time outdoors presenting less of chance to develop myopia. The team said the 23 percent reduction in the risk of myopia was actually less than they expected to obtain.

Other observational studies had been previously conducted, but they were based on real-life scenarios and not on experiments. They had discovered that being active while spending time outdoors didn’t have that much of an impact on the children’s chances of developing nearsightedness.

However, as is usually the case, these results require further studies in order to assess long-term follow-up of these benefits before the findings can be generalized. Outdoor activities meant to improve the health of school-aged children has seen a general appeal as of late, but researchers also wanted to test if they could slow myopia development.

Even though he was not part of the study, Dr. Michael X. Repka, a pediatric ophthalmologist at the Johns Hopkins University School of Medicine, thinks parents should understand that prescribing outdoor activities with the sole intent of reducing myopia risk might not be as effective, and the durability of the results is uncertain.
Image Source: Fars News