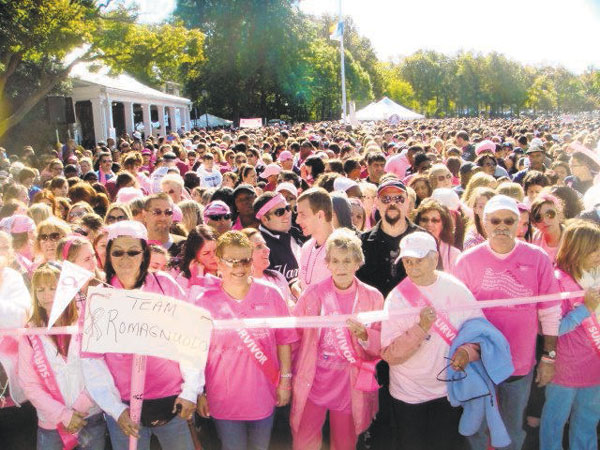 Making Strides Against Breast Cancer Walk has been a real success in previous editions.

A recent press release informs that the American Cancer Society plans cancer walk on October 10th. The event is just one of the numerous gatherings that cancer organizations are holding this month for cancer awareness.

October has been officially designated the month for cancer initiatives. Every year, societies’ offering support to cancer patients and their families, organize fund raisers and informative campaigns. The official color of October is pink – the official shade for breast cancer support.

The American Cancer Society is one of the strongest supporters of cancer-related campaigns, planning special events in various U.S. cities. The organization has recently informed that residents in the Mesa County have agreed to take part in a march against cancer.

The walking event, which was named Making Strides Against Breast Cancer will take place on October 10, at 8 a.m. in Sherwood Park, the campaigners have stated. More than 200 residents are expected to take part in this year’s cancer walk.

The breast cancer awareness tradition was started several years ago registering a gradually larger success every year. Past events have seen the participation of 158 Mesa County inhabitants, but the American Cancer Society hopes many more residents will be co-opted this year. So far, 13 teams of 69 members have been formed and more than $3,000 were raised.

The organization has further stated that the walk will begin at 8.am. and will end after just one hour at 9 a.m. At the end of the march, walking participants are invited to take part in the non-competitive walk where residents can have fun and socialize. The event will start with a live DJ and a silent auction. Participants can use photo booths to immortalize the great moments at the event.

Mesa County is not the only U.S. region where special breast cancer awareness events are being organized. The American Cancer Society is selling many pink products for women all over the world, while also preparing fund raisers. All the donated money will be used for cancer research.