You are here: Home / Tech & Science / Scientists Are Still Trying to Figure Out What Caused the 60,000 Antelope Die-off 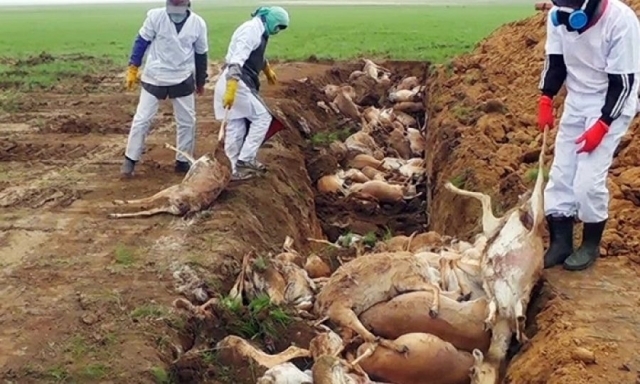 Conservationists are still horrified at the news of a massive loss of life among an endangered species of antelope that took place recently. Such events have the potential of devastating entire populations of species, and when the animal in cause is endangered, the need to find answers is even greater.

Baffled at first but the out-of-the-blue wiping of 80 percent of Kazakhstan’s saiga antelope, scientists are just now starting to put the pieces together and find some clues as to what happened.

Innocent bacteria turn out to be the main culprit here, according to investigative scientists. Usually living harmlessly in the animal’s bodies, the bacteria seem to have turned deadly, infecting the antelopes and causing their end.

Two bacteria showed up in the genetic analysis that followed the massive life loss – Clostridia perfringens and Pasteurella multocida – and researchers recognized them as being ordinary types of bacteria that ruminants like saiga usually carry in their upper respiratory tracts.

However, these bacteria couldn’t have killed the herds so quickly on their own; bacteria-caused disease only appears when the animals have weakened immune systems, and it usually takes a lot longer to spread in a heard.

That’s why Carlyn Samuel of the Saiga Conservation Alliance, the administrative assistant leading the investigative efforts, thinks that something else must be the cause here. She said that haemolytic septicaemia might be what hit the antelopes, a disease “caused by an opportunistic infection with the bacterium Pasteurella multocida serotype B.”

This super-infection causes massive amounts of lethal toxins to be released into the mammal’s intestine, which are then absorbed into the bloodstream and end up contributing to a quick death.

What’s not clear, however, is what triggered the antelope die-off; scientists are still trying to figure out why have these bacteria suddenly become so virulent. In just four days, 60,000 antelopes were dead, a rate of spread that gets ahead of the traditional course of and epidemic.

And it wasn’t just antelopes; by June, government figures reported that more than 148,000 animals became the toll of the die-off, although the real number could be even higher. According to the Saiga Conservation Alliance, they still encountered plenty of unburied carcasses at the sites of their latest expedition, which brings the figure closer to 200,000.

Scientists are now trying to figure out what other environmental factors could have represented the deadly trigger of the bacteria. Contamination and pollution of the air, water and soil have all been ruled out during testing, as well as radiation, as regional levels are within normal ranges.
Image Source: Yibada