You are here: Home / Health / Teens Start School too early in the Morning 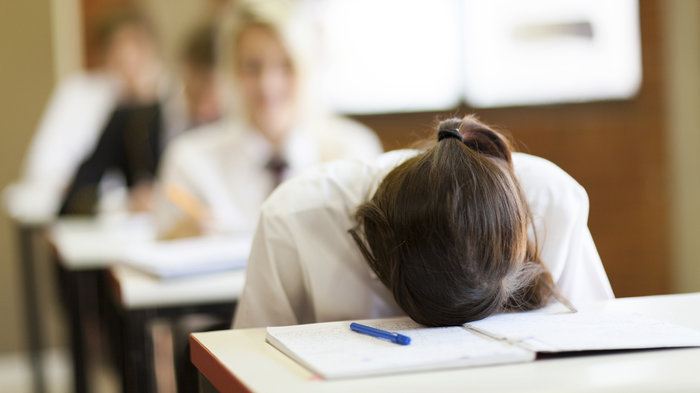 Let the kid sleep for a change, it might be better for him if he slept at least 30 minutes more.

Sometimes even parents might encourage this, unbeknownst of the fact that it affects their children’s health. Teens start school too early in the morning says a report by the CDC. No matter how much you’d like to discipline your child, you might tune down on that early rise routine.

Let’s face it, how many times have you seen that your kid that’s about to go to school is oversleeping? Did you go to wake him up, kick him out of bed, and shoot him out the door in a hurry? Sure you did! Now, it might change your perspective when you hear what the Centers for Disease Control and Prevention has to say about the early rise of teens. From sleep, that is.

The CDC report says that the school-goers of our nation are not getting enough sleep. Period. And it’s all because of two simple things. Number one: teens fall asleep too late, the majority over 11 PM. Number two: schools start too early, most of them beginning classes before 8:30 AM. This leaves the kids with more than not enough sleep.

While the number one cause of sleep deprivation in teenagers might not be controllable that much, since teens have a natural rhythm that prevents them from actually falling asleep before 11PM, the second cause might be combatable. On average, teenagers are in need of between 8 and a half and 9 and a half hours of sleep a night.

Considering they fall asleep at 11PM, most teens get at most eight hours of sleep. But many stay up till later hours. This lack of enough sleep is a serious cause for concern, as the CDC reports, and should come as a real public health issue.

Due to their sleepless nights, teens start behaving poorly in school, are always tired, and do not perform well in their academic tasks. Furthermore, the continuous sleep deprivation might cause the teens to develop more severe health problems like depression or obesity. The study says that kids are also more likely to overuse cigarettes and alcohol due to their stressful school situation.

So it’s indeed a growing issue that must be tackled.

The CDC says that parents can help by issuing a no smartphone before bed policy, as using it in the dark might keep their brains active for longer than usual. The CDC study was made between 2011 and 2012 on nearly 40 thousand schools around the nation. The results show that the average start time is 8:03 AM, while it should be somewhere after 8:30, so that teens can get enough sleep.