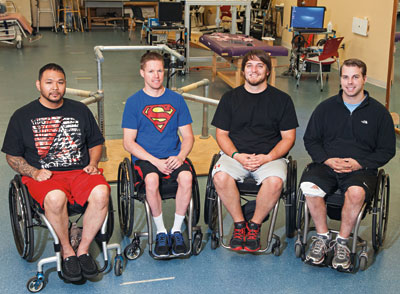 Non-invasive spinal cord implants have given hope to paralyzed patients.

Due to the recent medical advances, the first paralyzed patient recovered through spinal cord stimulation. The medical procedure has been operated with the help of a non-invasive spinal implant which stimulated neurons in the lower back of the patients on a regular basis.

Paralysis is considered one of the worst health affections at present because patients rarely recover from this condition. Medical experts and scientists have long worked to find the best medical procedure to alleviate the condition of these patients and this week, they were finally able to say that their efforts have paid off.

During a recent experiment involving five paralyzed patients, researchers at the National Institutes of Health managed to obtain voluntary movements from respondents’ paralyzed limbs. The achievement has been obtained with the help of the so-called transcutaneous implant, which was placed on the lower backs of the patients.

The said transcutaneous implants sent electrical stimuli in the spinal cords of the ill individuals forcing neurons to become active once again. Unlike other spinal cord stimulation devices, the new implants are not at all invasive, which means patients no longer have to undergo surgical operations to have the implants attached to their spinal cords because they may be used directly on their skin.

At the end of the experiment, all the nine respondents were able to move their feet without receiving stimulation at all. Participants will, nevertheless, continue their physical recovery routines in order to improve their movements and to regain stability in their inferior members.

The recent research gives hope both to patients and to doctors. Medical experts have concluded, based on the results of the new experiment that paralyzed patients may soon be able to move again thanks to the non-invasive spinal cord stimulation. Patients, too, have been pleased with the significant and fast results they have registered in the recent experiment.