You are here: Home / Tech & Science / Spectacular Northern Lights Show in the Skies 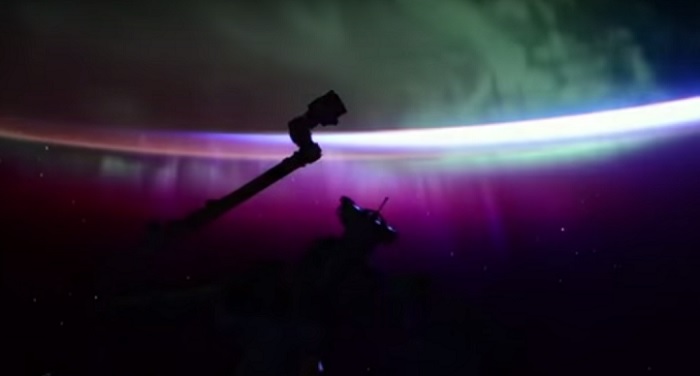 Aurora Borealis is an impressive phenomenon in itself, but viewed from space the images are much more beautiful.

Astronauts on the International Space Station took part in one of the most incredible show they have ever witnessed before: the Spectacular Northern Lights Show in the Skies. They shared the amazing images with fans and followers on their Twitter accounts, just to let us know that things really look more beautiful when seen them from afar.

The captures were posted by Scott Kelly, the NASA astronaut, who is carrying out a year-long mission on the ISS. The astronaut travelled above the Aurora Borealis at a speed of 17,000 mph, but this did not prevent him from photographing and recording the unprecedented event.

The 10-second video is all the more interesting as the green and violet lights of the Aurora Borealis meet the white sunlight. It appears as though the space is covered with a lid that is gently lifted allowing the white light to illuminate the space. The images, however, are just an illusion stemming out from the combination of the said colors.

Scott Kelly was just as impressed as the rest of the people on Earth who have had the opportunity of seeing his video, even though he has had many missions in space before. He accompanied his Twitter pics with a message indicating his 141 day in space. He further wrote that the day ended as it began with the lights of the Aurora Borealis.

Astronauts, who take part in space mission have witnessed similar phenomena many times before. Canadian astronaut Chris Hadfield surprised his Twitter followers with images from space during his last mission in the universe.

Scott Kelly will keep providing us charming images in the following months, as well as he has many more days to spend from his 342-day mission on the ISS. He left the Earth in March 2015 and is expected to return in spring 2016. His colleague on the station is Russian astronaut Mikhail Kornienko, who will also spend a year in space.