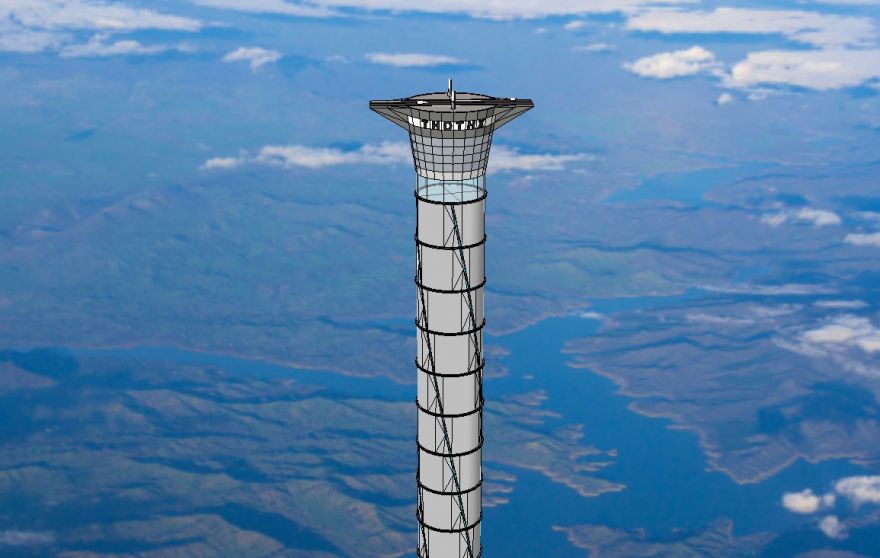 Remember when the idea of a giant elevator that would take astronauts into the stratosphere was first popularized by Arthur C. Clarke in the 1970s? It turns out that a Canadian space firm is taking it seriously, and it’s getting ready to do just that.

Even though this is not by far their topmost purpose for building it, the structure that Thoth Technology Inc. is planning on erecting would surpass the height Burj Khalifa – currently the tallest structure on Earth – by more than 20 times.

With patents granted by both U.S. and U.K., the company led by president and CEO Caroline Roberts dreams of taking astronauts 20 km [12.5 miles] up in the air by electrical elevator. As explained in a recent statement about the ThothX Tower, space planes would launch to orbit from the top of the tower, always returning to ‘base’ for refueling.

Thinking of the great cargo they would have to carry, developers have planned that each elevator car would be capable of carrying 10 tons. In order to prevent the phenomenon of tower bending from occurring on the 12.5-mile tall structure, a complex system of flywheels and gyroscopes has been designed.

On paper, space elevators are a great idea: they’re cheaper than building rocket launches, particularly when it comes to missions carrying heavy payloads into deep space or just on orbit. Compared to the conventional rocket, the company claims the space elevator could save up to 30 percent in the matter of fuel.

Cutting costs even further, Thoth Technology has imagined the entire structure to be made of reusable hardware. Wondering what’s the company’s main objective? Surpassing the limits of space travel limitation by lowering the cost of getting into space.

Brendan Quine, one of the company’s engineers, believes that the tower could be the answer that changes the face of space travel with a more environmentally friendly alternative. The space elevator concept could also be assisted by self-landing rocket technologies – currently tested by companies like SpaceX – ushering humanity into a new era of space transportation.
Image Source: Fox News