You are here: Home / Technology / Sony Is Carrying Out Tests for First Prototype Drone: Aerosense 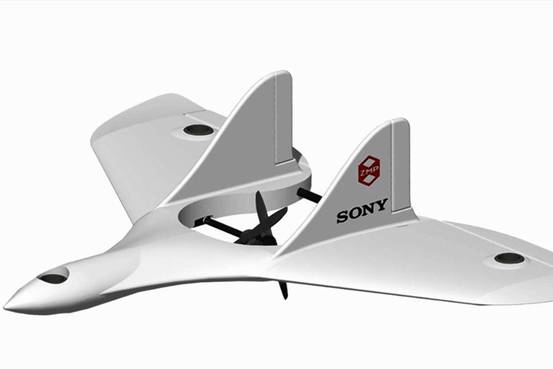 The new videos that have been posted on the company’s official website indicate that Sony is carrying out tests for first prototype drone: Aerosense. The press release, however, has provided us with additional details, according to which, the Japanese company is launching two new drone models that will serve scientific purposes – a niche that has not yet been approached by other companies.

The Tokyo-based enterprise has previously hinted towards its intentions of entering the drone-making business. The leap has been made and the first airplane-like drone, Aerosense, was unveiled on Monday.

Based on the video the drone looks like a small white airplane, but its design has several interesting particularities. The large propellers have been placed in the middle of the U-shaped drone making it somewhat different from the rest of the existing models.

This is not all; there are many other technical features that will most certainly make Sony’s new prototype stand out from the rest of the drones. According to Hisashi Taniguchi, the president of the Aerosense division, the drone is capable of performing vertical take-offs and landings.

Aerosense is aiming at a different market segment; their drones have to be able to carry out human-like activities, such as, inspecting, measuring and surveying an inaccessible location. They can last up to two hours while driven at a maximum speed of 106 kilometers per hour. In addition, the drone can carry a load of approximately 10 kilograms (22 pounds), according to Taniguchi.

Speaking of their new projects, president Taniguchi has stated that Aerosense drones have not been conceived for commercial or business-like purposes. Customers should not expect Aerosense to deliver products as is the case of other models from competing companies. The airplane drone will perform tasks that are usually too difficult to be carried out by humans, the CEO has concluded.

Even though Aerosense drones will not have a commercial use, it is interesting to observe, nonetheless, that they are the only ones that can carry large loads of up to 22 pounds. The same is valid for the second drone model that was introduced on Monday, namely, the AS-MCO1-P quad-copter.

The latter is more appropriate for observational studies, in my opinion, considering that it has been provided with a camera and a GPS system. The rest of its tech specifications have not yet been revealed, but Taniguchi has made it clear that it will not be intended for gaming purposes.

Sony has teamed up with drone producer ZMP for its new project, which is said to bring lots of profits to the company. Hisashi Taniguchi, himself, has expressed the great confidence he takes in Sony’s new project. He believes the new products will bring a company revenue growth of JPY10 billion ($82 million) by the end of 2020.