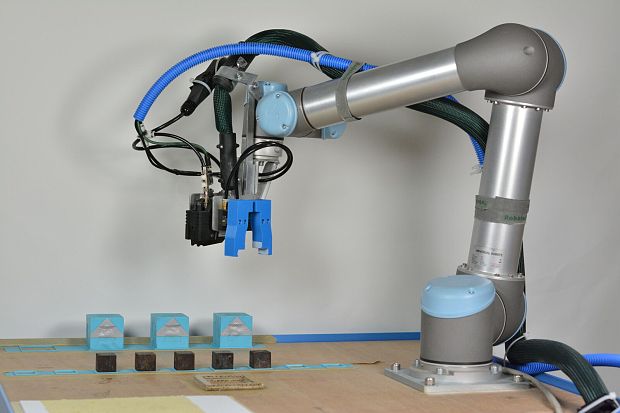 The Mother Robot at work building an army to take over the Earth.

Move along, move along. Nothing to see here. Or you can read on, provided the thought of a robot building Mother Robot doesn’t really give you the creeps. Yes, that’s right, a team of scientists and engineers have built a robot that can create little baby robots.

And get this: the mother robot was almost completely autonomous. Meaning apart from energy, it did not need anything else. No humans to operate it, no humans to give it indications, tools, assignments. Only humans to build it. This is getting increasingly creepy, isn’t it?

And then the researchers programmed the mother robot to create increasingly better little robots. That may sound like an apocalyptic scenario, but it is exactly what the team of scientists working at the University of Cambridge did.

What is the purpose of this experiment? You may ask that question, but keep in mind that mad scientists rarely need an actual purpose for their devilish contraptions. But no, all jokes aside, the robot building mother robot actually could have many uses. For humans, that is.

First, the combined team of researchers from Zurich’s ETH University and London’s Cambridge say, is that it could be very useful in the auto industry. There it could replace robots on the assembly line and automatically detect if something is wrong with a car piece and automatically fix it. Or maybe even improve it.

The second possible use would be in agriculture, where the bots could analyze crop results while taking themselves care of the fields, and then planning methods for increasing the yield. These farmbots could experiment on their own with everything that goes into the harvest.

The current system is pretty basic – just a big robotic arm with a few tools attached (this is the mother) which essentially tries to assemble plastic cubes into small robots. Each little cube has a little motor. Combined, the cubes should yield as much mobility as possible. The mother robot has sensors which can assess the performance of each of its sons, and then use the info to improve the next generation.