You are here: Home / Tech & Science / Robot Bartenders to Bring You Beer 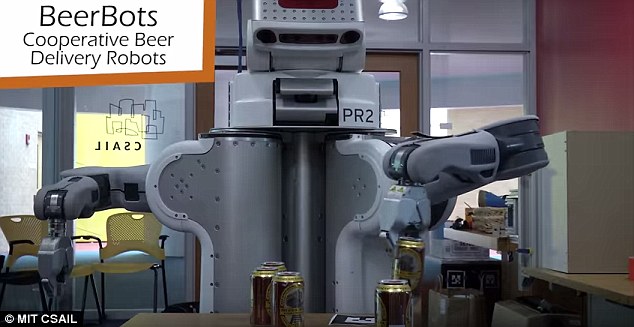 Bartender bot giving a beer to a waiter robot.

MIT engineers have created a team of robot bartenders to bring you beer. While some of the latest advancements in robotics may scare us, this one may be just the thing we need to make us complacent enough to ignore the robots taking over the Earth.

Obviously, I’m joking. Yet, the prospects of these nice little doohickeys running about giving everyone beer is pretty interesting to think about. And while it may seem like a simple task to do, it was, on the contrary, extremely hard to accomplish, lead scientist Ariel Anders says.

What, did you think the mastermind behind this project would be male? Shame on you for endorsing the social stigma that only men like lager. Ariel has set out to prove that it doesn’t take men to have men-like ideas. Like inventing robots who fetch beer.

The complexity of the task came from the fact that three robots had to work together to perform the tasks of asking if people wanted beer, getting beer, and then delivering the beer to the person. The programming essentially had to account for the kind of human disorderly behavior that could occur. Say, the robot asks if anyone wants beer, but nobody answers. Or it encounters another robot waiter along the way.

The three robot system was made up of a bartender and two waiters. The bartender was a PR2 model robot, which essentially had the sole task of getting the beer off the table and putting it in the cooler trays carried by the waiters. The waiters were two Turtlebots, four wheeled little devices that run around the floor.

To tackle most problems, the researchers programed the turtlebots so that they automatically go to a room, ask for beer, get beer, and go back to the room. This is done both by remembering the location of the beer order and that of the bar. Anders has said that they effectively tried to make the bots think like humans would. The turtlebots were programed to wait until the beer was placed on the tray, or wait until it was removed. When their trajectories met, they had to stop, and let one another pass.

Still, the team is now working on making the robots communicate their paths beforehand, so that these encounters are avoided, improving the service speed. After all, the bots may want to get their tip, right?

This experiment was not necessarily designed to eventually place bots in bars, but make robots act cooperatively. This could be used in the future in search and rescue bots, who often would work much more efficiently as a team.