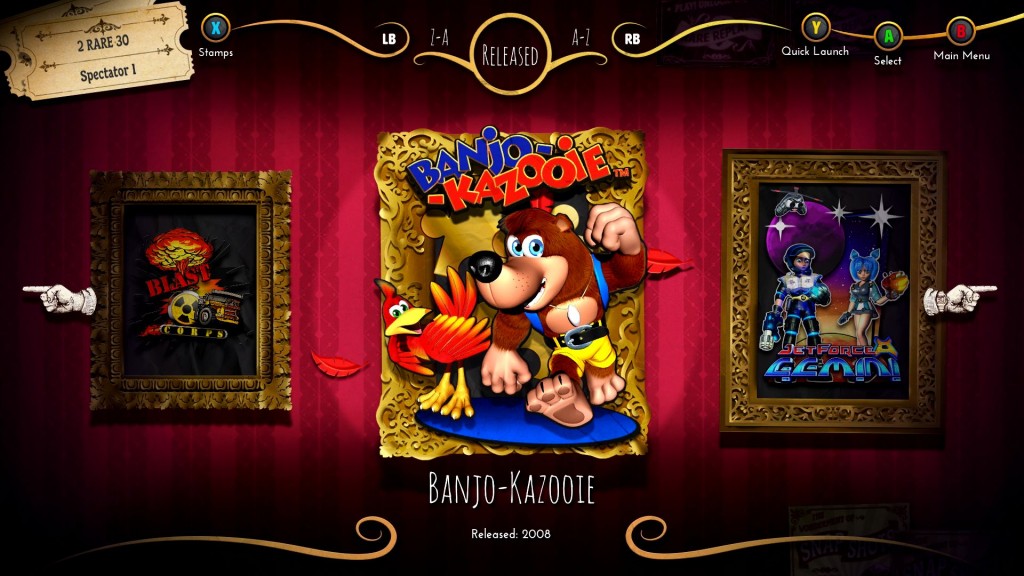 Banjo-Kazooie is one of the more enjoyable games in the collection.

Sometimes, it’s fun walking down the nostalgic memory lane, so Rare Replay revisits your childhood games by providing a collection of 30 of their old classics. Microsoft’s little protégé, Rare, is turning the big 3-0 this year and they’re celebrating by releasing an extensive compilation of their games, modestly optimized to work on Xbox.

While it’s impossible to properly put the pixilated, tiny resolution at a 4:3 ratio on today’s widescreens, some of the gathered games are classics dating back three decades ago, so gamers should treat them kindly. They range 1983 to 2008, nicely wrapped in a catchy package.

The 30th anniversary for Rare presents the 30 games collection at the price of $30. It makes for the mere price of $1 per game, but it’s still up for debate in among players if every slightly disappointing optimization of games that weren’t successful even in their own time is worth the good and successful classics included in the compilation.

However, few could resist the classics, especially those who want to relive some moments of their childhood on the bulky TV screens that some of this generation have hardly seen in their lives and fire up their Nintendo 64 (sometimes, after a few tries). Or, it could be the opportunity to take a peek of what gaming was like thirty years ago.

The collection presents itself in a “Hall of Fame” type of interface, presenting each game, along with additional content on behind the scenes game-making, unreleased content, and interviews before and after their release. The good and bad news is that none of the games have changed. You will be able to play it as you did thirty years ago, but there are some additional features.

For anyone who finds the collection worthwhile, they would be able to enjoy the Snapshot challenges, spicing up the retro games by allowing players to learn useful mechanics that will ensure the difficulty is not too overwhelming for the modern gamer. If you’re new to games from the 80’s and 90’s, some might seem easy, but others are real head-scratchers and the tips might be quite crucial.

It will also give the Xbox One player the option of rewinding back the game in order to fix potential mess-ups, that’s not unlike a more extensive check point.

The collection does miss some of Rare’s more successful games developed by Nintendo that fans of the console have famously enjoyed along the years, such as Donkey Kong 64 or GoldenEye 007, due to ownership rights.

The ultimate choice is still up to the player himself. There are 10,000 Gamescore points available and it’s up to each in part to decide if they want to revisit some of Rare’s classics, some in their full pixilated glory of how games used to be like.