You are here: Home / Health / Pedaling at Work is a Thing 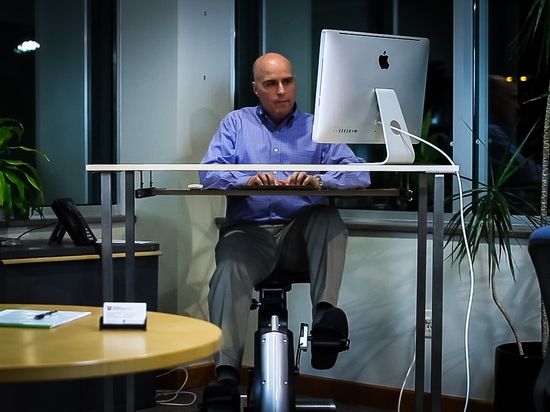 You may think this silly – it’s actually really good for one’s health.

Yes, pedaling at work is a thing. You may have heard about those little devices that look like 5% of a bike, which you put under your desks and pedal away. While providing an efficient method of keeping your legs busy while your hands type away, a new research has shown it actually improves your health.

How is that? Well, the obvious. Pedaling makes you burn up calories. And if you do it long enough, it may become like an unconscious habit – the kind like when you constantly remove the battery lid of your mouse, or when you keep drinking water without being actually thirsty. So the moment you start doing this unconsciously, you may end up burning just enough calories to stay fit

This new study finds could prove revolutionary for those of us who have to spend 8+ hours sitting in a chair with our eyes glued to a screen. Soon, even our boss may want to further glue our feet also to these little pedals, as the study also shows that exercising like this improves productivity.

The study was made by Lucas Carr from the Iowa University. The findings your boss may be most excited about say that pedaling at work increases concentration, stabilizes the workflow, and also lets you take less sick days. The part you could be most excited about is that this small yet efficient exercise encourages weight loss. So bye-bye fat!

However, this habit may look a bit odd. If it’s not silly, it’s a bit resembling a dystopian society in which in order to exercise, one has to pedal while working. A bit depressing, but not too much. Carr’s study maintains that people who work at their office all day but exercise regularly still cannot maintain a healthy lifestyle. This may be just what they need.

The concrete evidence was provided by a test on 27 employees. These each got a device called an activeLife Trainer, basically two fancy bicycle pedals to put under one’s desk. The devices had an activity monitor, and the subjects were thus timed. Their average was 50 minutes of pedaling per day, during a 16 week test period.

The end of the test provided the most relevant result – as 70% of those who had received the device wanted to keep it. This was surprising, even to Carr and his team, who were not expecting such a high result.

To this extent Lucas Carr says he will continue his study, with the hopes of eventually promoting the wide use of such devices in offices.