You are here: Home / Tech & Science / Pastafarian Flying Spaghetti Monster Commands the Universe from the Coast of Angola 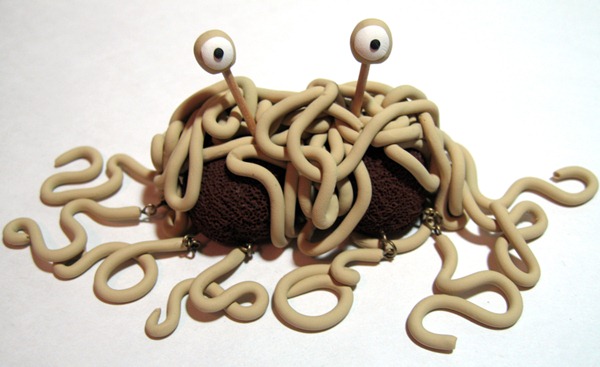 The Flying Spaghetti Monster deity has been invented by Bobby Henderson in 2005.

The Internet has got into a frenzy due to a recent footage proving that the Pastafarian Flying Spaghetti Monster commands the universe from the coast of Angola. Scientists at SERPENT, on the other hand, claim the jellyfish is an exemplar of the Bathyphysaconifera species.

The marine creature was first spotted by a team of gas and oil workers while they were performing their routine tasks. According to their declaration, the exemplar resembling the famous Pastafarian Flying Spaghetti Monster deity appeared at a 4,350-feet depth in the Atlantic Ocean triggering many questions in relation to its characteristics.

The images have been carefully analyzed by scientists in charge of the SERPENT project. This organization aims to collect as many recordings as possible about underwater species. These footages are later on used to understand the peculiarities and the needs of deep water exemplars that would otherwise remain undiscovered. SERPENT experts usually cooperate with oceaneering workers, who are more likely to spot these creatures in their natural habitat.

Prof. Daniel Jones of the National Oceanography Centre, who is also working for the SERPENT, has stated that the newly discovered jellyfish is not the Pastafarian deity, even though it really looks like a capsized bowl of spaghetti. He explained that the exemplar is a member of the Bathyphysaconifera species, a close relative of jellyfish and corals.

Unlike other jellyfish families, the Flying Spaghetti Monster is not at all harmful to people. It usually has a colonial shape and it is located in the Western waters of the Atlantic Ocean, which explains why oil workers have spotted one around the coasts of Angola.

By studying the structure of their colonies, scientists have discovered interesting things about the Bathyphysaconifera jellyfish. According to them, one single exemplar comprises a large colony of cloned members. Each individual colony member carries out different tasks and chores in order to keep the creature alive.

Although the microorganisms are cloned, they all have different characteristics. Some are used to feed the exemplar, others to allow the creature to move around the waters, while other organisms are used for reproduction. As one might expect, the long spaghetti-shaped tentacles are used to grab the food.

Pastafarianism is a mocking religion claiming that the Universe has been created by the Flying Spaghetti Monster. Images of the parodic deity illustrate a jellyfish wearing a Rastacap and dreadlocks instead of tentacles. The term was first coined by Bobby Henderson in 2005 during the protest he made against the intelligent design that educational institutions diffuse.