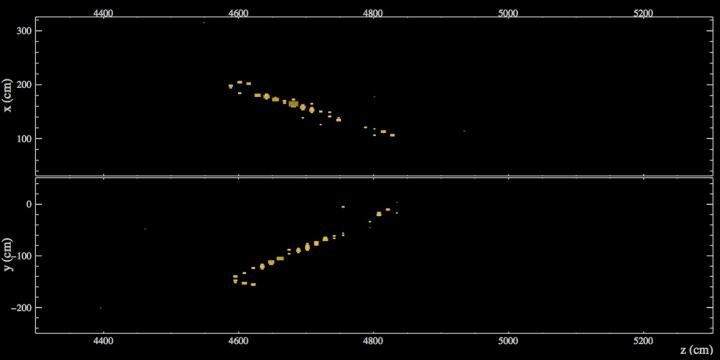 This may not look like much to you, but for some, it’s the result of ten years of work.

The scientists at Fermilab have released the NOvA results after a 500 mile shot that fired neutrinos from their lab outside of Chicago to their other lab in Ash River, Minnesota. This may sound scary because it involves the word shot and neutrinos – but it’s okay. It’s actually a really big achievement.

I’ll admit: it’s one of those scientific accomplishments that has the general public scratching the back of their heads in indifference. To understand this one, you really have to know a bit more than your high-school physics class has taught you. But let’s try to explain in the simplest way possible.

Neutrinos are the most obscure of particles. They’re like the Goth kids that somehow still think it’s 2008 and they’re a thing. Actually, neutrinos are a pretty big thing, and small at the same time. They are subatomic particles that are found in just about anything you can imagine. Like Goth kids, they like to go through life not interacting with anything and anyone. That is why they are called neutrinos, they are neutral. Well, this much you may remember from chemistry.

The results come after a humongous investment in the device that captures the neutrinos, from Ash River, as well as the one that fires them, from Chicago. This means traveling the 500 miles marathon distance through the Earth, so that no outside interference would be possible. What happens is the Fermilab fires neutrinos generated right then and there, and scientists predict how many are to arrive at the Minnesota center, at what time they are expected and what type they would be.

If the experiment were to fail, scientists predicted that of the trillions of muon neutrinos they had sent, they would manage to observe 201. 201 is a lot, considering that most do not interact with anything. So they were looking for a maximum of 201 interactions. But lo and behold! They saw but 33. And instead of one electron neutrino interaction (which would’ve been interference), they saw six!

We may not be that excited, but they are! This is a giant step in subatomic physics and could help in cosmology, other fields of physics, as well as in chemistry.