You are here: Home / Tech & Science / NASA Invites Space Fans to Send Their Name to Mars 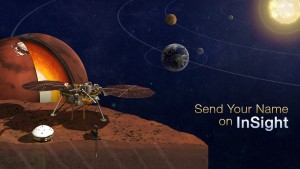 The InSight mission aims to study the interior of the Red Planet, particularly its seismic activity.

Based on their recent press release, NASA invites space fans to send their name to Mars and be the first to send a message to the outer space. The space administration is building a silicon microchip, which will contain a list of terrestrial names and will be sent to the Red Planet during their upcoming mission.

The competition is part of the preparation works that NASA is currently undergoing for the launching of the InSight Mars lander which is scheduled to arrive at destination in 2016. Jim Green, the director coordinating the mission says the event has been organized to allow as many people as possible to be part of the Mars journey and to support space exploration.

The official announcement on NASA’s website wrote that submissions will be accepted until September 8, 2015. Interested space fans can register their names on the website of the administration: http://go.usa.gov/3Aj3G.

Visitors have to choose between creating a new account and accessing their existing page upon entering the web page. If you’re a first time visitor like me, you will have to fill in the registration form, but that won’t take more than a few seconds.

Once you’ve provided the requested data, you’ll see your ticket to Mars displayed on the PC screen. Needless to say, this is a unique and rather impressive moment, so don’t be ashamed to let your emotions out.

NASA encourages people to register and create accounts as you can gather many points with each competition you take part in. I’m not sure whether I’m lucky or NASA is REALLY generous, but the simple registration of my name for the InSight Mars mission has brought me 297,805,305 points.

According to the administration, these frequent flier points prove that you are a strong supporter of NASA’s missions for space exploration. Yet, some of us still hope these points will eventually win them the dream space travel they have been waiting for centuries. Or, at least, I do.

If you don’t make it in time to register for the InSight mission, there is no need to worry as NASA reassures fans they will have many more opportunities to gather points during their future missions. NASA’s Exploration Mission-1 is the upcoming space exploration project that will also see the participation of the lay public.

The silicon microchip that NASA is currently building for the Red Planet is not the first to be sent in space. Space experts already sent a microchip containing the names of 1.38 million people on NASA’s Orion spacecraft in December 2014.

InSight will be launched from NASA’s California-based air force base in March 2016 and it is estimated to arrive on the Red Planet on September 28, 2016. The mission will be the first to study the interior of the planet and to measure Martian quakes and seismic activity.