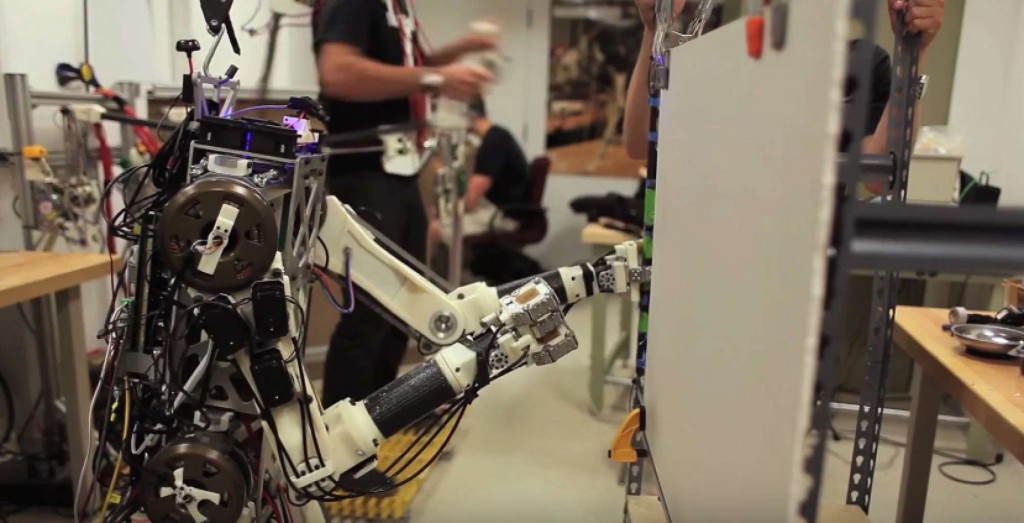 Hermes preparing to punch a wall in a controlled test.

It’s time to meet Hermes, the MIT robot with human reflexes. The scientists and engineers from the Massachusetts Institute of Technology have adopted a head on approach to the issue of humanoid robot movement and stability issues: give it human reflexes.

The biggest issue up until now with humanoids was that they had major difficulty standing on their own two feet. This may not seem like rocket science to you, but for the MIT guys, it posed a very difficult challenge.

Essentially, they wanted to do away with all those videos in which bots embarrass themselves and the researchers that have put an insane amount of work into them, by simply falling over. Hermes on the other hand, if it happens that he (or it) stumbles, the human wearing the exosuit would easily correct its trajectory.

In fact, the human can control just about anything that the robot does, so you don’t have to fear that the machine will run amok now that it has all the reflexes it needs. But the engineers from the Biometrics Robotics Lab have still made it much stronger than an ordinary human being, as it is intended that Hermes be a disaster response robot.

Robots created for disaster response are engineered in such a way that they could reach places that a human could never reach. But the machines have been largely inefficient due to their inefficiency. Now, though, a human working from a remote, safe distance, can control the movement of the robot: from the arms, legs, and torso to his fingers and grip. This way, the human can ensure the force of the grip through a couple of buttons on the joysticks controlling its arms.

Still, people are skeptical to how a robot with human reflexes may end up in the wrong hands, while some are speculating that the robot could be a good cop, or could provide an extremely useful tool for future space missions, and could perform space walks, reducing the human risks to zero.

While some are calling for the imminence of a robot apocalypse, the scientists assure the public that the new invention would be used solely for emergency response, and search and rescue missions, or other scientific missions, and never for doing harm.

However, the scientists still want to integrate some artificial intelligence in the mechanical creature, so as to not be completely reliant on the human controlling it. But Hermes is still in its early stages, and for now, we can only be excited by it.