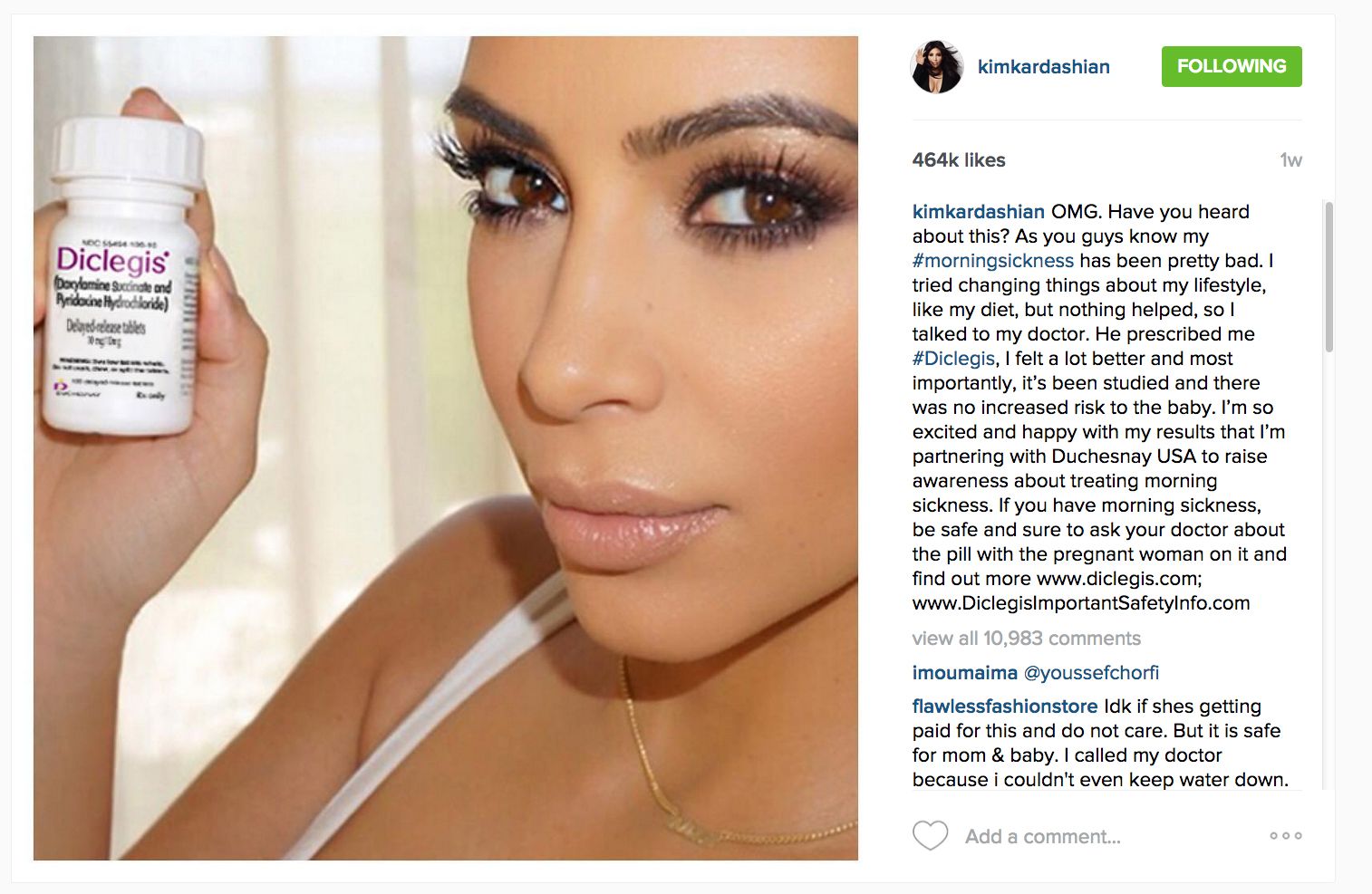 What a perfect plan: paying a pregnant A-list celebrity to advertise your newly approved medication against morning sickness might seem like a great idea, especially when influent social media platforms are involved, such as Instagram and Twitter.

And before the FDA got in the middle of it, it sure was. Kim Kardashian posted last month an Instagram picture and a message on Twitter about how Diclegis had eased her morning sickness, which didn’t seem to harm anyone. She also mentioned that the medication was completely safe for her baby, along with the disclosure that the manufacturer was offering her compensation.

With the kind of reach that the Kardashians have, the message quickly spread to hundreds of thousands of women, many of whom commented that they had already called their doctors to ask for the same medication.

But last week, the federal Food and Drug Administration reacted by sending the manufacturer (Duchesnay USA) a letter claiming that the Instagram post was in clear violation of the Federal Food, Drug and Cosmetic Act.

This law protects potential patients of misleading claims of efficacy, because it requires manufacturers to also include risks and side effects, not just benefits. Because Kim’s post hadn’t included any mention of potential risks or contraindications, the company complied with the FDA’s order, and Kardashian was asked to delete the post, which she did.

This is not the first time a celebrity is being compensated in exchange of their endorsement for prescription drugs, a form of direct-to-consumer advertising. There are plenty of examples in the business, even though a sound logic would argue that celebrities shouldn’t be the ones offering us medical advice.

In spite of this, marketing research proving the method works has kept pharmaceutical companies willing to pay top dollar. It’s true that the effectiveness can go both ways – some cases prove that involving celebrities has ignited change and spurred awareness for various diseases.

So the question remains: why was Kardashian asked to take down her compensated post? The medium through which she offered endorsement for the drug might have something to do with the answer.

Think of the small print at the bottom of the magazine advertisement or of the rushed speech on television that reminds viewers to consult their doctor before taking the advertised drug. Potential clients can be warned of the medical contraindications when these mediums are involved, but when it comes to Instagram, there’s no fine print hashtag to make this information known.

In this aspect, direct-to consumer advertising has taken a new form by paying celebrities to endorse prescription drugs through sponsored social media posts. It might be good business, as it reaches thousands almost instantly, but it might be bad medicine practice. Removing the fine print is not the answer.
Image Source: The Verge