You are here: Home / Tech & Science / Gatherer Drones on Mars and the Moon 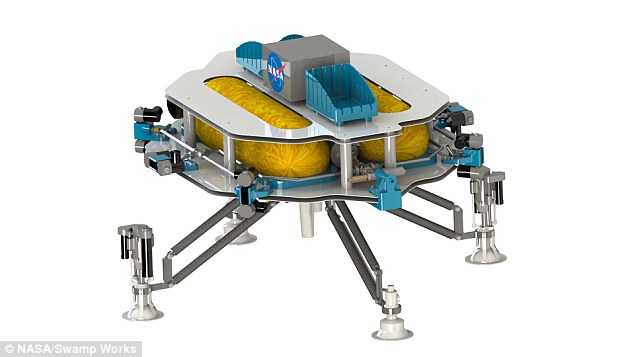 Drones to be sent to Mars, the Moon, or to asteroids.

Soon, the future bases that will be established on the Moon, or Mars, will probably say something along the lines of “we require more minerals”, or “not enough minerals”, prompting the people inside to scavenge for supplies. For this very purpose, NASA is now toying with the idea of gatherer drones on Mars and the Moon.

The basic principle behind the prospecting devices would be similar to that of workers in strategy games. They get sent out to find resources, then gather a predefined quantity before coming back to the base. The same goes for these little drones. They would be sent out from the base, look for usable materials in a preset location, then come back with their findings. This could enable the devices to use batteries that would be rechargeable upon return, so as to not rely on sunlight.

The idea behind these vehicles is to send them into places inaccessible or uninviting to rovers or astronauts. Such places are already known to exist both on the Moon as well as on Mars. Besides these two destinations, NASA researchers also plan on sending the devices to asteroids.

Due to the difficulty of reaching such places, the engineers are equipping the drones not with wheels, nor with rotors, but with air or gas pumps. The idea is for them to be able to fly above the surface, so wheels are out from the start, but rotors are impractical as well.

On Mars, you have an atmosphere 100 times thinner than that on Earth, so for any kind of lift to be achieved, you would need really big rotors, which, naturally would consume too much energy. Energy is already hard to come by on the Red Planet.

To this extent, the engineers from the Kennedy Space Flight center, led by the Swamp Works lab, have come up with nitrogen, oxygen, or even water jets that would supply lift.

The drones could be used to find minerals or water, both important resources for the future colonizers on Mars, or for the scientists working on the Moon. On our natural satellite, there exist tunnels left over from ancient volcanoes. The scientists speculate that these lava tunnels could shelter humans from all the harmful radiation that exits on the surface of the celestial body.

The drones, which could measure up to 30 feet, could carry a tool to a site, gather about seven grams of material (either soil samples, ice, or minerals) and then bring them back. This could be done every few minutes, if the sight is close enough, so the gathered amount would be significant over a longer period of time.

This is another step forward for many NASA missions, including the Mission to Mars, planned for launch in 2030.