You are here: Home / Technology / Explore The Mysterious Space Station in “Tacoma” 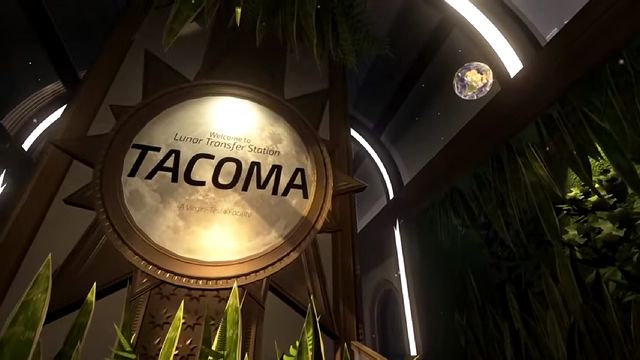 Tacoma is a deserted lunar space station with a mystery for the player to uncover.

Independent indie game publisher Fullbright will soon allow curious gamers to explore the mysterious space station in “Tacoma”, a story-based videogame where actions are limited, but the view is stunning. If you enjoy games centered around narrative content and mysterious puzzles, this might just be the one for you.

Fullbright has become well known within the world of indie games by their 2013 success “Gone Home”, a story focused around the protagonist Katie and her return home from Europe only to discover her house empty and her family gone. It allowed the player to search and investigate for possible explanations and uncover useful clues intertwined with an excellent story.

The game won two VGX awards, including one for Best PC Game and Best Independent game, along with gaining positive reviews and high praises from critics.

Now, the independent studio based in Portland, will be treating gamers with a new sci-fi mystery to uncover in “Tacoma”. The player will be placed within the shoes of Amy Ferrier, this game’s more active protagonist who will venture around the deserted space station in search for answers as to what occurrence, event or accident drove everyone away.

Tacoma is a lunar space station, where our hero arrives in order to start working a new job, only to observe that every single human there has disappeared. Unlike “Gone Home”, where the protagonist explored the modest and familiar setting of her own house, Amy is thrown into a world unknown to us and her, with futuristic gadgets, impressive design and an excellent view.

The player’s controls will be limited, though slightly more varied than the company’s previous hit. They will be able interact and use their character’s engineering skills to fix things across the space station that might uncover answers. After all, she was there for a job, so it’s quite understandable that she would present some skills in addition to simply walking around.

And that would be exactly what the player will be doing: walking. There’s no running, no jumping or crouching. You will be all but forced to take in the futuristic design and otherworldly surroundings, but it might be well worth it. There are answers on board of that ship and they had made sure that there will be more of a ‘horror’ factor to “Tacoma” than “Gone Home”.

The protagonist will wander curiously about the space station, interacting with its mysterious, and slightly suspicious AI overlord, ODIN, along with forming more pieces of the puzzle by speaking to virtual ‘flashbacks’ of employees conversing with each other, found around “Tacoma”. They’re essentially monochrome Teletubbies who give you an insight to their discussions previous to their mysterious disappearance.

The game is a first-person, story-driven indie that is reported as being bigger than “Gone Home” and will drive players to investigate carefully and slowly toward the final answer.

It will be released next year on PC, Xbox One and PlayStation 4, but most of us can’t help but wonder how much better it would be with a virtual reality headset. A mental note to make for the next 5 to 10 years.