You are here: Home / Technology / Emoji Usage Quantified by SwiftKey Via Interactive Map 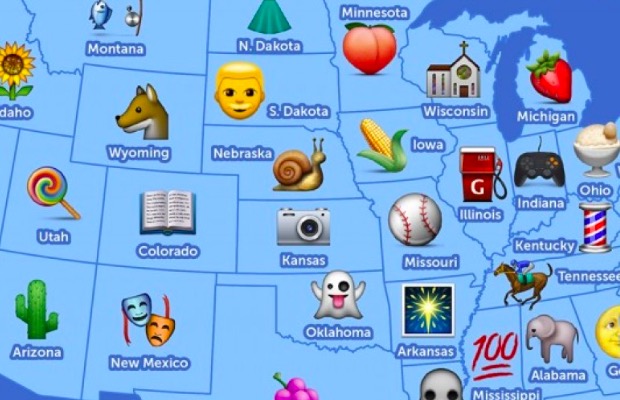 Which emoji do New Yorkers prefer? Is it the yellow cab or the skyscraper? Are Californians diverse in their emoji usage? Do Floridians dream of emoji waves?

Answers to all these – and more – were offered by SwiftKey, the predictive keyboard creator, whose software is now used on more than 250 million devices around the globe. Crunching the data it collected from its U.S.’ users’ emoji usage was done via its SwiftKey Cloud back-up and syncing system, and the results are here to wipe away those burning queries.

So if you were ever curious about which emoji are preferred by your fellow Americans – a legitimate preoccupation in this digital era we live in – wonder no more, because SwiftKey has analyzed over one billion emoji usages to get to you these statistics.

To sum it up in just a few words, each state has its favorite emoji – California has rated unsurprisingly high for taxi emoji, while Washington raised eyebrows with their preference for the wine emoji – must be because of all the European diplomats mixing business and pleasure. For some reason, New Jersey chose the sad emoji as their patron.

And while Californians are also big on conversing with LGTB and people emoji, New Yorkers were eager to tap on female- and party-related emoji more than other states. On the other hand, Ohio startled with an above-average usage of violence- and drugs-related emoji – and an especially low interest in sending flowers and insects.

Other fun statistics revealed a weird interest in the poop emoji showed by Vermont’s population, and a strange preoccupation with eggplants in Nevada. But don’t despair if your state has yet to be mentioned – you can go check SwiftKey’s interactive map, where each and all United States of Emoji are included.

In addition to this fun map, the predictive keyboard creator has also announced that its iOS product will be updated with extra emoji and what they call “the emoji state.” Based on their emoji use, SwiftKey will show U.S. users which state’s preferences they most resembles.

Two new concepts will also be made available on iOS devices; the “top emoji” – which will be displaying the user’s most-tapped emoji; and the beta “signature emoji” – aka the emoji the user has sent more than other people.

Ever since the launch of iOS 8, Apple opened the keyboard system to third parties, which means that SwiftKey has to try harder to fend off competition, especially since the diversity in emoji-centric keyboard has increased significantly.
Image Source: AltPress