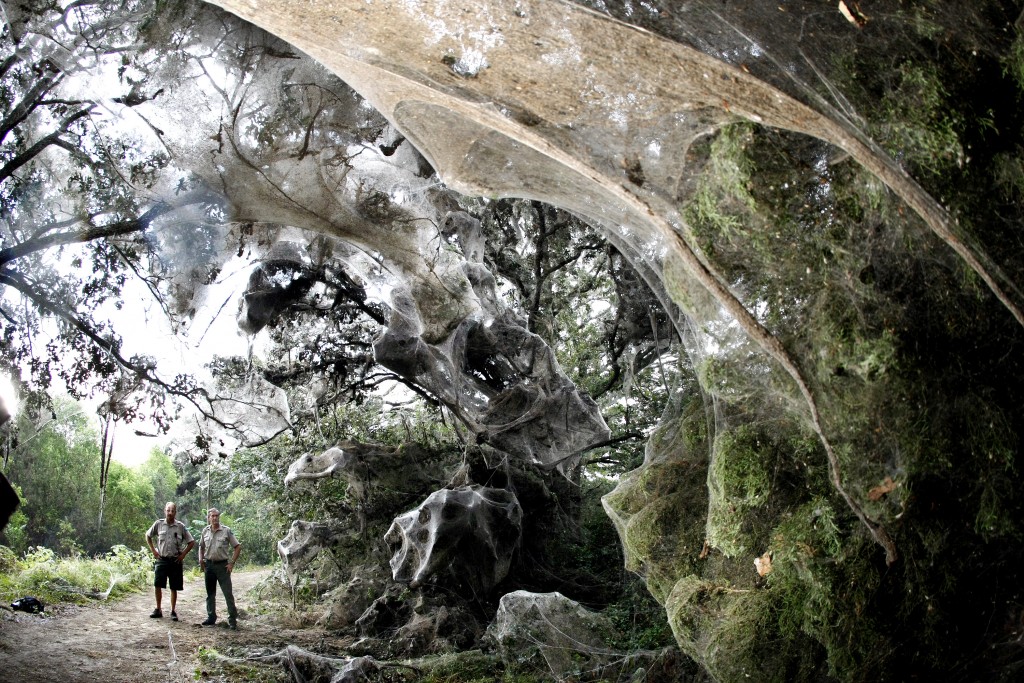 Spiders, spiders – why did it have to be spiders. Why not butterflies?

Okay, nope. So much nope. I don’t want to live on this planet anymore. AgriLife Today reports that suburban Dallas spiders built a giant web. It’s time to pack our bags people, let’s colonize Mars. Sure the atmosphere may be inhospitable, but we’ll work it out. At least there are no spiders.

All jokes aside, Mike Merchant, an urban entomologist from Texas’s Extension Service of A&M AgriLife, has uncovered huge, meticulously arranged drapes of spider web in the area close to Dallas. In fact, if you take the CA Roan Drive to the suburb of Rowlett, you may see for yourself this wonder of nature, as the area is long as a football field, Merchant says.

The spiders’ house has obviously been a communal effort to build. The web goes up through the trees about 40 feet and the report says that it is probably the home of thousands of spiders. Talk about communism, these little critters have it all figured out!

Although it is very rare, spiders do sometimes do this, but the conditions need to be just right.

There has been one other case, back in 2007, near Lake Tawakoni State Park, where a species of spiders called Tetragnatha guatemalensis built a web that was extremely large. Although it positively gave the people of the area quite the scare, it also gave scientists something to be amazed at. The species was known to produce these kind of communal homes, yet it had never did one on record in the US.

Still, for the webs to be built by otherwise extremely individualistic spiders, the food needs to be more than abundant to feed them all. Fortunately, this happened both for the 2007 case, as well as the current one.

Although there are calls to use pesticide on the trees, Merchant said that there is no need for such measures. As you may know, spiders are non-intrusive creatures. Between them and us humans there is a mutual respect: if you leave them alone, they will probably leave you alone. Furthermore, Merchant says that these webs are wonders of nature and are much better left alone for people, especially arachnologists to look at.

The current species is unknown, but speculations are that it’s also from the Tetraganthidae family. Merchant says that people visiting the spiders’ home should treat it with respect,, as if it were a work of art in a museum: do not touch.