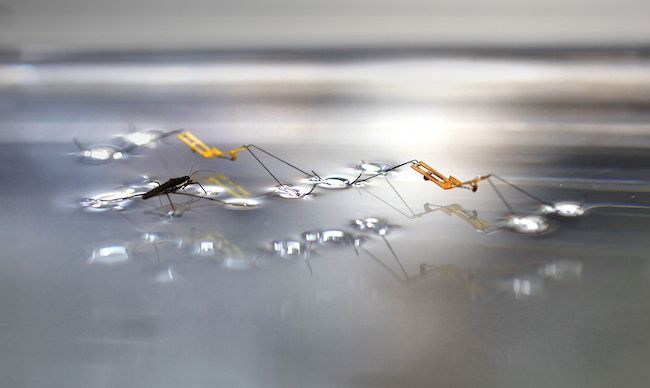 Field Experts from Harvard University and Seoul National University have developed some spider-inspired robots that not only walk, but actually jump on water surfaces.

Just last month a new study published in the journal BMC Evolutionary Biology revealed that spiders are very skilled sailors, with most species traveling across oceans, rivers and seas whenever they feel like migrating and colonizing new territories. What’s more, while sailing skills vary from species to species, the researchers tested 325 different arachnids and were unable to find one that couldn’t stand on water.

And now, a new study from the field of robotics introduces us to a group of tiny, fascinating robots that may be even better sailors than Mother Nature’s spiders. The prototype is two (2) centimeters long, weighs 68 milligrams and is based on a group of semi-aquatic insects known as “water striders”.

Kyujin Cho, study co-author and professor of mechanical engineering from Seoul National University, gave a statement saying that “I’m just fascinated by how the water striders can jump on water and I’m really excited to see that we were able to extract the principles from nature to re-create one of the most fascinating locomotion of nature, the water jumping”.

He went on to explain how it all works – in order for a water strider or a water-strider-inspired robot to be able to jump on water, they have to press on its surface at just the right speed so that they have “an adequate amount of time, up to a certain depth”.

The water striders are also aided by their somewhat curved leg tips. They adopt a rotational leg movement in order to jump off of the water, a fact that the researchers noticed only after collecting several specimens and taking extensive video of their behavior in order to figure out the mechanics that allow the creatures to perform such fascinating tasks.

Robert Wood, study co-author and member of the Harvard Wyss Institute Core Faculty, gave a statement of his own explaining that it took the research team several tries before they could really understand how the water striders manage to jump on water.

But eventually, the team realized that applying as much force as one can, as quickly as possible, will result in the legs breaking through the surface of the water and the jump failing. However, if one maintains contact with the surface of the water for as long as possible, even during the jump, and presses down on it, this will result in a successful jump.

The researchers then used theses findings to develop the tiny robot that mimics the behavior of the water striders. In fact, the invention works so well that the surface of the water can support 16 times the robot’s weight before it breaks.

Professor Cho informed that many insects manage to jump on the surface of the water due to having a great deal of physical intelligence, and that the researches looked precisely at this trait in their quest to develop robots that can perform extreme maneuvers without having artificial intelligence or any kind of very complex controls.

The new study was published earlier this week, on Friday (July 31, 2015), in the journal Science.