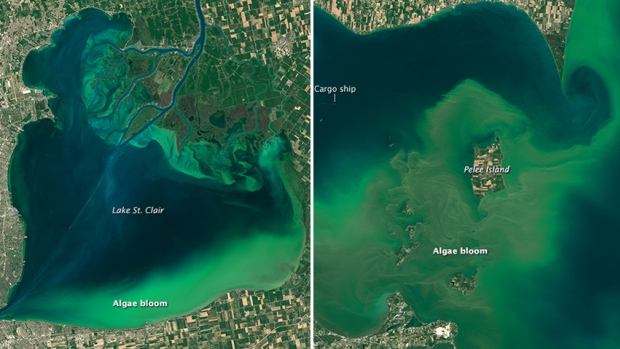 New satellite images captured by Landsat 8’s Operational Land Imager, showing algae blooms in lakes Erie and St. Clair have been unveiled by NASA. These photos show huge green waves on the surface of the lakes as of July 28th.

These results are worrying as the algal blooms are threatening entire ecosystems. A combined effort by NASA, NOAA, the Environmental Protection Agency of the U.S., as well as the U.S. Geological Survey has been launched in order to secure the general public from the harmful effects of algae.

The greatest fear of the scientists monitoring the situation is that the algae bloom is made up of cyanobacteria, the most dangerous type of algae that can appear in the Great Lakes. The problem now is that even with this highly detailed view, they cannot say for certain whether the algae is in fact toxic or not. Dr. Richard Stumpf of the NOAA says that further data is needed to be able to draw conclusions.

The agencies predicted a huge algal bloom back in July when it was confirmed that Erie had been going through a June much wetter than many it has had, one of the wettest ever recorded. This excessive humidity fosters a perfect environment in which algae would develop, as it brings a great concentration of phosphorus in the lake. The algae feed on phosphorus like kids on cotton candy. They love the stuff!

All jokes aside, this is a very serious problem. The last time such a bloom occurred was in 2011. This one threatens to be even bigger than that one. Dr. Stumpf also reported for TIME the risks involved for the general population involved with the lakes. The least that could happen, according to Stumpf, if the lake does not have cyanobacteria in high concentrations, is some intestinal trouble. But, if the concentration is higher, liver damage is imminent, as well as an increased risk of dermatitis. The greatest problem is for water swimmer dogs. The pooches tend to jump into any and all waters, yet if they go into contact with even the smallest concentrations of the toxic bacteria, they can have serious problems which often lead to death.

It has been confirmed that the biggest source of phosphorus that damaged the area was coming from farms surrounding the lakes. The scientists have warned against the usage of phosphorus based solutions in farms. One other cause is, evidently, climate change. The lakes have had weather conditions that increasingly favor algae blooms.

Up until July 30th, tap water was reported as still safe to drink.