You are here: Home / Tech & Science / Saturn’s Moon Tethys Has Red Graffiti Sketches on Its Surface 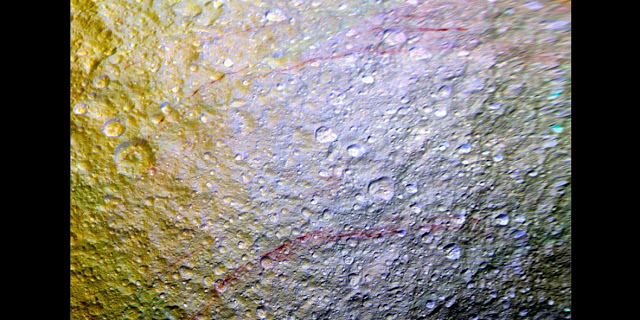 Various hypotheses have been made in relation to the red lines on Tethys’ surface, but scientists need more evidence to draw a conclusion.

A recent photo released by NASA proves Saturn’s moon Tethys has red graffiti sketches on its surface, triggering many questions on behalf of scientists. The photos have been captured with the help of NASA’s Cassini spacecraft, which arrived in Saturn’s system in 2004 and will continue to circle its atmosphere until 2017.

The unusual red graffiti-like scratches have not been observed when the pictures were first captured by the spaceship, according to NASA’s experts. They had to combine various images taken with different green, clear, UV and IR spectral filters in order for the unusual forms to be observed.

By closely observing Cassini’s photos, researchers’ eyes have fallen on several highlighted colors on the surface of Saturn’s moon Tethys. The red streaks that seem to have been made by a graffiti artist, are not normally visible to human eyes; they become noticeable when images are filtered through NASA’s computer programs.

The new discovery remains a mystery for scientists, who cannot explain what led to their formation. They are also puzzled by their reddish color, although they are using it as a clue for their future studies on Saturn’s Tethys moon.

So far, researchers have only managed to infer that the red arcs could have been caused by ice on the surface of the moon being exposed to chemical impurities. Another hypothesis suggests that the graffiti-like design could be just an emission of gas coming out from the icy moon.

However, scientists believe many more studies should be conducted and much clearer pictures have to be captured in order to explain this unusual phenomenon. These investigations are necessary as scientists believe the red lines might represent fractures in the moon’s surface. The current resolution of the photos does not allow researchers to further study this hypothesis.

This is the first time when scientists have noticed this unusual phenomenon on one of Saturn’s moons. A similar pattern is traceable on the Dione moon, whereas the other 62 moons do not have mosaic color patterns.

Cassini will continue its mission on Saturn until September 2017, providing scientists with many more pictures about the activity of the gas giant. At the end of its mission, the spacecraft will make an intentional dive in Saturn’s atmosphere during which scientists will make use of its last moments to get a closer view of the planet.