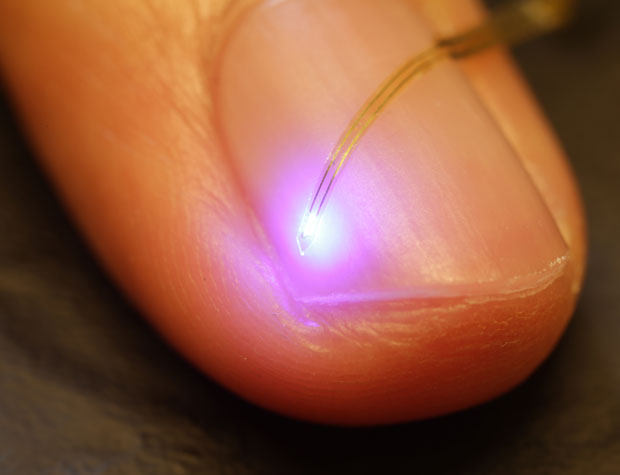 The implant will inject medicine directly into the brain with minimal damage.

Researchers at Washington University have created a remote controlled brain implant that injects drugs wirelessly into the targeted area. With such a complex and intense activity, the human brain still clings to some mysteries and science is taking steps to better understanding.

The tissue implant recently developed is said to be the size of human hair, with 80 micrometers thickness and 500 micrometers in width, minimizing the damage of usual procedures used to introduce drugs directly to the brain. Through an easy injection, the device has shown great promise in mapping out brain activity and targeting a specific area.

The experiment was condoned on lab mice, using a combination of injecting drugs and shining light on brain cells that would essentially control movement. By surgically planting the implant, researchers were able to command the mice with a push of a button, either telling them to move around in circles, standing still on one side of the cage and injecting them with dopamine as a reward.

While that proved a great amount of control in their hands with a simple use of a remote control, they were also able to inject viruses that naturally label cells with genetic dyes, which allowed them to view and examine circuits of the brain to excellent details. That bit of information alone could be the step between finding where the disease lies and leaving the patient uncured.

The revolutionary tool is far subtler than the large metal tubes commonly used and will be able to access deep within the brain with minimal damage. Due to its texture and composition, it harms much less brain tissue than any other device of its kind.

Along with helping the medical community better understand intricate brain processes and hopefully aid the advancement of neuroscience, the tiny tissue implant might be used in the future to treat conditions such as depression, addiction and pain by targeting the specific areas of the brain and injecting them with medicine.

So far, the new device can hold up to four different drugs to be inserted directly and four microscale light-emitting conductors to be available at the push of a button. The remote control is set to have a range of up to three feet so far.

It could change the way patients medicate themselves in the future, and researchers are hoping that this will aid advancement in more domains than neuroscience, expanding over to other systems and organs.