You are here: Home / Tech & Science / No River, Ocean, Or Sea Will Stop Spiders From Getting You 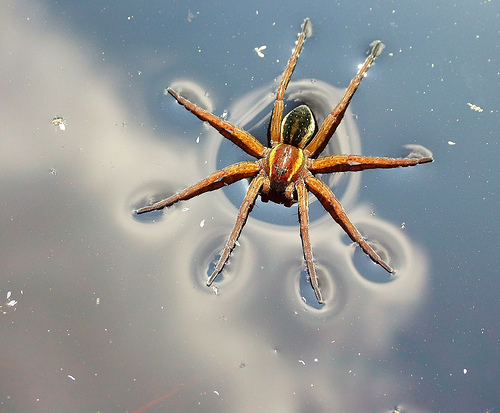 The future is set in stone. Spider and cockroaches will officially inherit the Earth once humanity is done burning greenhouse gases, dropping atomic bombs and ruining ecosystems. Simply put, they’re some of the most resilient creatures to ever roam the planet.

A new study published in the journal BMC Evolutionary Biology has found that most species of spiders have been sailing across rivers, oceans and seas for centuries, to the point where it’s become a refined skill set that they can pride themselves on.

Researchers say that the arachnids use their long legs to harness the wind, and their silk to cast an anchor for themselves on the water. Oh, and they’ve also been known to throw a line to a wondering raft every now and again. It’s only one of the many techniques that spiders everywhere use in order to migrate and colonize new areas.

And did you think water is the only element that favors them? Well, you were wrong if you did. It turns out the creepy crawlers are not just good at crawling and sailing, but also at flying. The phenomenon, documented a couple of months ago in Australia, is known as “Spider Rain” or “Angel Hair”. What happens is that Spiders climb on top of plants, trees and buildings, leap off into the air and use their silk to create a parachute of sorts so that they are able to catch the breeze.

The “flying” technique is referred to by experts as “ballooning” and if the whether permits it, the creatures can use it to move for up to 30 kilometers without ever taking a break.

Morito Hayashi, lead author of the new study and expert with the London Natural History Museum gave a statement saying that Even Darwin’s notes served as inspiration for the new project. They described how spiders kept falling on the Beagle, no where near the sea shore.

The expert went on to add that “But given that spiders are terrestrial, and that they do not have control over where they will travel when ballooning, how could evolution allow such risky behavior to be maintained?”.

He and his colleagues found their answers by collecting and surveying no less than 325 spiders selected from 21 different species across several small islands around the UK.

They took the creepy crawlers inside the lab and first placed them on trays of water, then grabbed some air pumps and started using them to mimic the wind conditions that the arachnids would encounter if they were sailing out in the wild.

What they found was that there wasn’t one spider that was not capable of standing on water. Their water-repellent legs kept them afloat, and out of the total of 325 spiders, a remarkable 201 showed some level of sailing skills.

Hayashi explained that spiders actively choose to adopt postures that make it easy for them to use the direction of the wind in order to control the way they move on the water. Many of them spread out their long legs so that they could catch the wind, and the researcher even said that they can stop on the surface of the water whenever they like.

They were also observed using silk to grab onto various floating objects that could help them find a way to get to shore.

The working theory is that the spiders developed this ability in order to make sure they don’t drown when landing into a pile of water after ballooning, and it’s safe to expect that spiders will outlive us all.