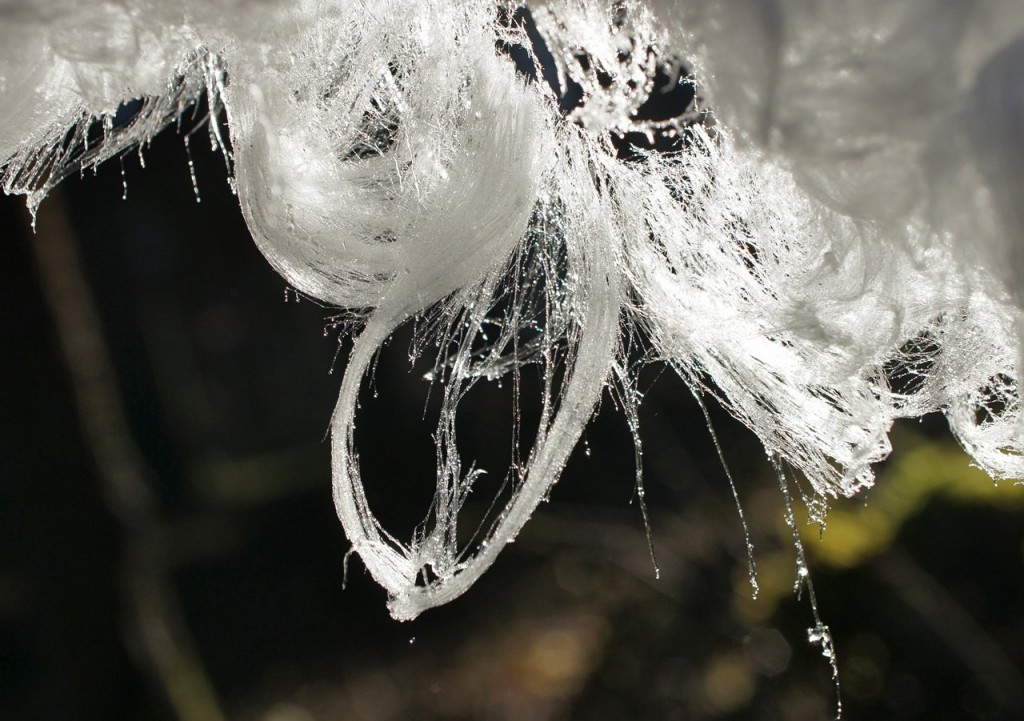 Hair ice is a rare sight.

Thanks to the efforts of three separate scientists, the odd, yet strangely beautiful hair ice phenomenon mystery is solved and, spoiler alert: it’s fungus. While few people might’ve heard of this candy-floss like formation, even fewer have seen it.

It’s a rare phenomenon, said to occur on humid winters when temperatures drop below 0° Celsius in broadleaf forests only at latitudes between 45 and 55°N. This rare phenomenon that causes ice to form like silky hair on top of wooden logs or branches has remained a mystery previous to the study ending just yesterday, on July 22nd.

It’s rarity, oddness and strange beauty has drawn the attention of physicist Christian Mätzler, chemist Diana Hoffman and biologist Gisela Preuß, all of which conducted their series of tests, experiments and examinations until they could come together with a definite answer to this unique phenomenon.

Hair ice has been discovered by Alfred Wegener in 1918, who then underwent his own type of research into the matter after noticing the pure white strands of hair-looking ice on a piece of fungus infested wood. The matter of how was answered by a mere theory when his assistant found traces of fungus mycelium, which is basically a pore-like mass where mushrooms grow.

While it remained a theory for the next 90 years, Gerhart Wagner, has then found a proper relation between hair ice and fungus by grabbing a sample of the wood presenting the phenomenon and treating it with fungicide before dunking it into water. It essentially killed the fungus that allowed for the floss-like threads to grown, thus proving that if there was an effect of the fungicide, there was a fungus there to kill.

However, both the mechanism and the species of the plant remained unknown until the three scientists undertook the task themselves.

Physicist Christian Mätzler performed a series of experiments and discovered that the base mechanism beyond the odd phenomenon is ice segregation. The water freezes near the wood creating a crust-like surface and allowing a very thin space for drops from underneath to remain between the ice and the wood’s pores. After repelling the intermolecular forced within the “crust”, the water inside the wood moves outward through suction and adds more to the existing ice in thin threads.

Biologist Gisela Preuß then by analyzing the samples collected from forests in winters between 2012 and 2014, found one particular species of fungi, Exidiopsis effusa, present in all of them. Chemist Diana Hoffman further researched into the matter and discovered two organic compounds typical of fungal activity, lignin and tannin.

The phenomenon is very rare and few ever get the chance to see hair ice for themselves. However, there is a fleeting window of opportunity for certain people to catch it during nature walks after nightfall but before sunrise when the rays will easily melt the thin hair-like threads.