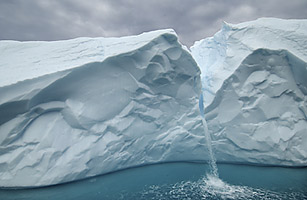 Ice levels around the North Pole have hit very low levels this year.

A five-nation (including the US) accord was signed yesterday which announces a large scale fishing ban in Arctic waters. This came as a result of an annual report which raises concern over the effects that commercial fishing may have on ecosystems around the North Pole.

The National Oceanic and Atmospheric Administration released a report which states that the area of the Arctic Ocean which is covered by ice has reach a critically low level last year. This is due to rising average ocean temperatures, which have also led fish stock to migrate further North.

The signing nations – Russia, Canada, Denmark, Norway and the US – wish to protect these stocks from potential large scale fishing operations in international waters, at least until the effects of the recent climate changes can be properly understood.

This accord only covers waters outside of each nation’s exclusive economic areas so that the coastal populations would not suffer from its effects. It will only affect the waters closer to the North Pole, navigable zones recently created by the melting of the ice cap.

Fortunately, no difficulties were met by the nations in coming to an agreement, as some feared there would be due to increased tensions over the past year between the US and Russia. The accord is albeit an urgent, interim one until further research is conducted and more clear conclusions are found.

The agreement does provide for increased cooperation between the signatories in order to fasten this new research, with a join scientific program being mentioned in its text. Environmentalist organizations have praised the agreement, though they stress that much more needs to be done in order to remedy any potential disasters.

Sophie Allain from Greenpeace explained that the Arctic regions represent a unique but very fragile environment, and it was about time that the importance of the area was officially recognized.

While it may not be permanent, this agreement is a sign that world leaders are starting to pay increased attention to our planet’s dire environmental problems, being willing to even throw political conflicts aside (at least for the time being).

The fate of the Northern ice cap remains uncertain but this ban should prevent matters from further deteriorating, giving scientists the time and resources to find a way to solve this issue. First steps are often the most important ones.