You are here: Home / Tech & Science / Black Leopards Have Distinct Patterns of Spots 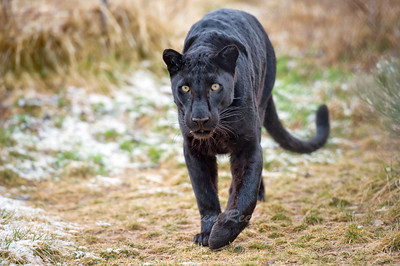 Until now, the black leopards have given headaches to conservationists and wildlife researches alike that were trying to keep a track on them without direct interference. But now, due to an accidental infrared camera shot it was revealed that black leopards have distinct patterns of spots. This research was presented last week in the Journal of Wildlife Management.

The Malaysian black leopard is thought to be endangered, but attempts at keeping track of the current population have been unsuccessful due to the apparent similarity between individuals. However, thanks to a camera set up by a research team from the University of Nottingham a solution has been found.

The camera was automatically rigged to take photos of leopards and, fortunately for the researchers, the infrared flash was left on during daytime. To their astonishment, the team found out that black leopards have very detailed  patterns of spots on their furs. The patterns were simply hidden by their dark fur.

The fur may offer a natural form of camouflage in the wild but it is also a highly sought prize on Malaysia’s black market. It was known that the animal is a target for poachers, but up until now the impact upon the numbers of black leopards could only be guessed.

The expansion of human settlements is also thought to be another factor that threatens the species. Large deforestations are occurring in the North of Malaysia for this reason, destroying the habitat that black leopards depend upon.

Senior author of the study Laurie Hedges stresses the importance of understanding how the leopards react in a world increasingly marked by human presence. She is hopeful though that the newly discovered method of tracking the beasts will make a difference.

The first step in saving them is establishing their current population, in order to see if and how rapidly it is declining. Following that more information regarding their behavior and needs could be found.

Now researchers can easily identify the creatures from a distance. They have already started counting them and the results seem promising. An average density of 3 leopards per approximately 40 square kilometers has also already been established.

The research upon the black leopards continues and hopefully enough data can be gathered in order to convince the authorities to properly protect them before it is too late.