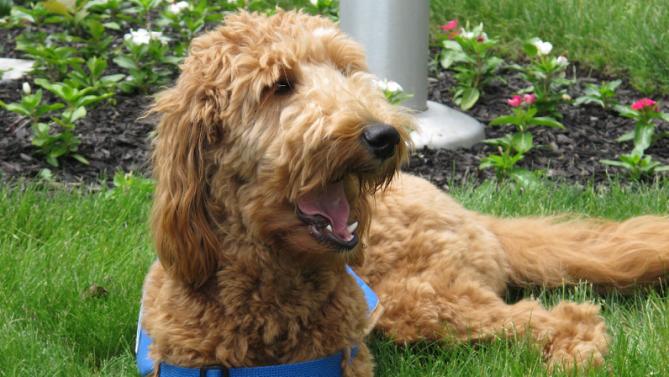 Lulu, a curly haired dog, is the most recent employee of the Ballard-Durand funeral home. Sandy Del Duca was one of Lulu’s patients to comfort, as she was mourning the death of her father.

Lulu is not just the pet of Matthew Fiorillo, the owner of the funeral home, but a full-time employee as a comforter for mourners – a practice that increases in prevalence across the United States.

According to Del Duca, the dog’s presence helped her immensely; a funeral can never be a great thing to that part in, but these comforting dogs help the participants feel more at home and with a sense of familiarity during the service.

Funeral owners noticed that dogs – trained therapy animals in general – have a knack for lightening the tense atmosphere that usually surrounds events such as wakes or funeral services. Some of them often seem to know exactly who needs their help the most, and they go sit next to them.

Mark Krause, director of Krause Funeral Home and Cremation Service in Milwaukee, said that it’s always endearing to watch a group of mourners light up when a dog joins their circle. People visiting a funeral home are usually on edge and they feel awkward, but the dog gives everyone the chance to let their hair down for a moment.

Oliver is the dog that Krause bought as a family pet more than 10 years ago. He followed training to become a therapy dog and then proceeded to do what therapy dogs usually do: visits to hospitals, nursing homes and schools.

In 2011, Oliver died and he was buried in a beautiful service with more than 150 people present. Another dog, Benny, became the successor in the position of funeral home therapy dog.

Back when Oliver started his regular visits to the funeral home, it was not common to see pets at such events. However, Jessica Koth of the National Funeral Directors Association said that in spite the fact that there are no statistics on the matter, animals in funeral homes have since become more common.

Usually, dogs are preferred in detriment of cats, even if cats can be trained or well-behaved, as well. Dogs give you a feeling they love you even more than they love themselves, which is comforting in such stressful situations. Cats have a tendency to lurk and surprise people in an unpleasant way.

According to other funeral home owners, these dogs are very comforting as they give the mourners a new subject to focus on, something else to think about and give their attention to.

Lulu has undergone training for almost a year when it was just a newborn. Fiorillo spent a total of about $5,000 on the cute little dog that now wears a blue and white vest with the words  “Therapy Dog” on one side and “Pet me, I’m friendly” on the other.
Image Source: Yahoo News