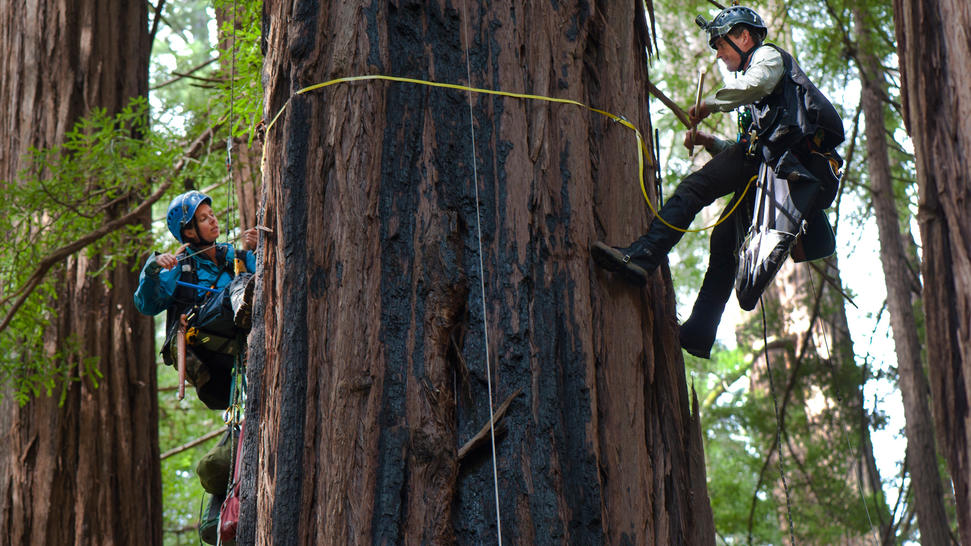 Scientists measure the three-ring pattern of Tree 76, the tallest tree in California.

A newly established study claims the Tallest Tree Found in California’s Muir Wood Is 777 Years Old. The tree was believed to be a lot older, but recent researches have shown that the forest might be, in fact younger, Save the Redwoods League declared on early Tuesday morning.

California is worldwide acknowledge for its lavish flora, especially for the rare species of trees that may be found on its territory. Scientists have got involved in numerous research projects in an attempt to classify the trees and to gather useful information about their age, size and other individual characteristics.

So far, it was believed that the oldest tree is located in California’s Muir Wood. Scientists have estimated that Tree 76 was 1,500 years old. The tree is the tallest species to have ever been found in California’s Redwood, hence the tremendous attention that the plant has received in the past years.

Recent studies have been carried through in order to determine the exact age of the plant. Thus, biologists have found out that the initial 1,500 age was wrong and that Tree 76 is only 777 years old. A rather advanced age, if we were to consider humans’ regular lifespan. Yet, experts believe the Redwood exemplar is very young compared to other similar groves located in the northern regions of California.

Based on the data withdrawn by the Save the Redwoods League, Tree 76 is very likely to have appeared during the 13th Century at the time of the Inquisition. The exemplar is 249-foot-tall and currently holds the world record as the tallest tree in California’s Muir Wood.

The study that was performed by the Save the Redwoods League represents an ambitious endeavor of keeping a close track of the rare species existing on the territory. For that matter, the age, the size and the tree-ring history of some of the most popular California Groves have been carefully documented.

Experts believe this information will help them identify the individual three-ring patterns of the trees and, later on, determine groves’ reactions to climate changes. Biologists have only managed to discover until now, that three-ring patterns appear larger in trees during wet conditions and, on the contrary smaller during dry weather conditions.

It was precisely the three-ring pattern of the tallest tree in California’s Muir Wood that has enabled scientists to find the real age of Tree 76. Moreover, the same means of investigation have helped biologists document a 2,520-year-old coast redwood near Crescent City and to determine that the oldest sequoia tree in Sierra Nevada is 3,240 years old.

The science director and leader of the research group from the Save the Redwoods League, Emily Burns has stated that the recent findings suggest the California grove might have formed later than it was initially believed. The wood might have been forced to regenerate itself after a fire, flood or other natural catastrophe, the scientist concluded.
Image Source: NBC Bayarea