You are here: Home / Technology / Road Accidents To Be Reduced by Samsung Safety Truck Prototype 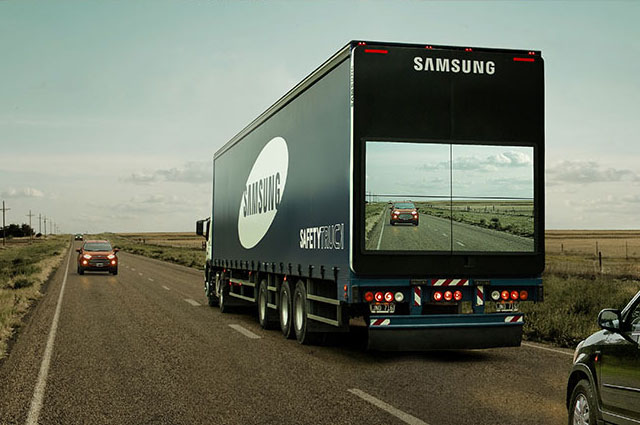 All of the drivers out there have experienced at least once being stuck behind a massive truck they couldn’t overtake because of the decreased visibility of what is coming on the opposite lane. It’s not fun and there isn’t much one can do, which usually leads to frustration.

Getting around a huge truck in a safe manner is often difficult, as most situations lead to dangerous overtaking. Police reports show a lot of accidents happen when drivers try to overtake transport trucks even though they can’t make sure the road is clear and that there are no cars coming.

Samsung recognized the danger and decided to take matters into their own hands. So, the company’s engineers came up with a solution that would reduce road accidents occurring due to unsafe overtaking.

The result of their brainstorming is a prototype vehicle dubbed Samsung Safety Truck, which has mounted wireless cameras on top of the truck cabin whose live feed is displayed on four screens located at the back of the vehicle.

This way, it’s easier for the driver that’s behind the truck to see what happens in front of it, creating better visibility and a safe opportunity for overtaking. The Samsung Safety Truck also has a camera that is equipped with night vision.

The prototype was first tested in Argentina, where traffic accidents occur on a very high rate, mostly because two-lane roads are most frequent. Samsung’s project would have highest application in countries where road safety is reduced because they don’t have many four- or eight-lane highways.

Samsung hopes that their new project will help reduce the number of road collisions that happen when drivers try to overtake the car in front of them – especially when it’s a large vehicle that drastically limits visibility.

Some argue that Samsung Safety Truck’s efficiency might be limited to two-lane roads, while highways with multiple lanes would render it rather useless.

The prototype that was used for testing is reportedly no longer working, but Samsung has announced its plans of a future collaboration with government regulators and nonprofit organizations that are also concerned about road safety.

Following a successful partnership, the Safety Truck will make an appearance on public roads in the near future. And because Samsung’s solution for lower rates of road accidents is so simple – a camera and some screens – other companies and countries could take and adapt it on other truck models.
Image Source: Regal Tribune