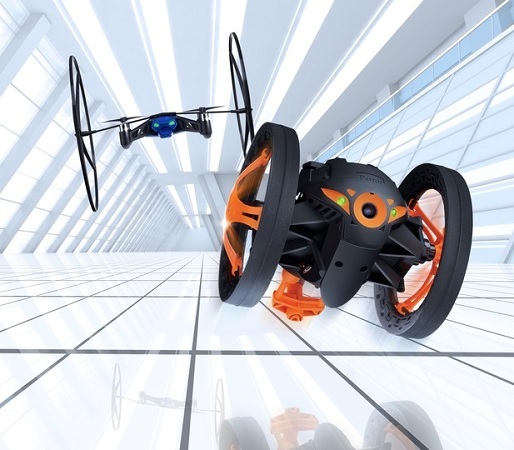 The wireless product manufacturer from Paris, Parrot launches new entertaining mini-drone that has captured the interest of all Internet users. According to the presentation video that the developing enterprise has released there isn’t anything that the mini-drone can’t do.

Parrot, the Paris-based company that has become popular for its cordless products is now trying to win the drone market sector. The producer will be releasing more than 10 new products this year, the most recent one being a highly entertaining mini-drone.

Customers will most likely be charmed by the mini-drone as it can perform various activities. Based on the tests that have been recently made, the mini-drone can fly, drive on land and float on water with extremely accurate precision.

Moreover, the device is easy to control using just the producer’s app. Based on developers’ declaration, the app has been purposefully designed to enable all customers to use it, regardless of their experience with these type of products.

Unfortunately, drone lovers have been somewhat reluctant as the app requires them to use two sliders, one for the forward-back movements and the second one for left-right directions. The majority of the users, who have tested the mini-drone have complaint that the two sliders hinder the control of the device.

There is a wide range of colors that the company has provided for their drones and the prices, too, differ, based on the activities that the drones may carry out. The Airborne Cargo model costs $99, whereas the Night prototype has been labeled at $129 due to its advanced specifications.

The two models have been provided with 0.3MP cameras and 4GB of internal memory. The maximum speed limit that the mini-drone can achieve is 11mph.

The only inconvenient that tech analysts have found is that the product does not have a good battery life. Batteries only last for several brief flights, which prevents customers from fully enjoying their products.

Parrot, however, will soon solve this issue. The company has disclosed in a recent declaration that they will soon be releasing a new battery charger that only requires 25 minutes to power the drone, as opposed to an hour and a half – the amount of time that users currently need to recharge drone batteries.